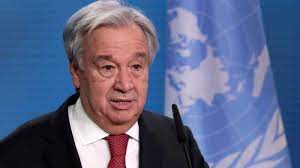 KARACHI, Sep 11 (DNA): United Nations Secretary-General Antonio Guterres
left for the US on Sunday after wrapping up his two-day visit to
Pakistan while reiterating that the natural calamity which has hit the
south Asian country needs global response.

Sindh Chief Minister saw him off at Karachi Airport this
morning.

The UN chief paid the visit on 9th and 10th of this month to show
solidarity with the people of Pakistan who are braving a colossal
climate-induced natural disaster caused by unprecedented rains and
floods across the country.

During his visit he called for substantial and sustained support and
solidarity from the international community to overcome the enormous
challenges posed by the unprecedented climate induced floods in
Pakistan.

Besides high-level meetings, briefings, interactions with displaced
people, UN country representatives, civil society and media, he also
visited flood affected areas of Sindh and Balochistan, where he was
given an overview of the rescue and relief efforts of the Government of
Pakistan and national and international partners. Prime Minister Shehbaz
Sharif accompanied him during his visit to flood-hit areas.

Talking to media on Saturday, the foreign dignitary observed that
Pakistan had no resources to compensate for the loss of lives, crops and
livestock. “Those who had created such situation must massively support
Pakistan as Pakistan can’t do it alone. I am not asking for generosity,
but for justice,” he added.

The UN secretary-general said the countries vulnerable to climate change
including Pakistan must be supported to rebuild resilient communities
and infrastructure to resist future disasters. He also called for a
reduction in emissions.

Prime Minister Shehbaz Sharif while appreciating UN Secretary-General
Guterres’ support for the Pakistan flood victims said that he was deeply
touched by his empathy and leadership.

In his tweet Sunday, PM Shehbaz wrote: “A big thank you to UN SG
@antonioguterres for his unprecedented support of the flood victims. His
two-day visit has been critical in raising awareness about the human
tragedy. Deeply touched by his empathy and leadership. Pakistan needs
global support to overcome this challenge.”

“During his visit to the flood-affected areas & camps under scorching
heat, UN Secretary General was overwhelmed by the scale of devastation
that has engulfed Pakistan. His voice has become the voice of flood
victims. The world should pay heed to what he said about climate
change.”

On Sunday, while seeing him off, CM Shah expressed his gratitude to the
UN head for his visit to Pakistan for showing solidarity with the flood
affected people and for visiting flood relief camps to get first-hand
knowledge of the difficulties being faced by the affectees. He lauded
the personal efforts of the UN secretary-general for the resolution of
these problems. DNA