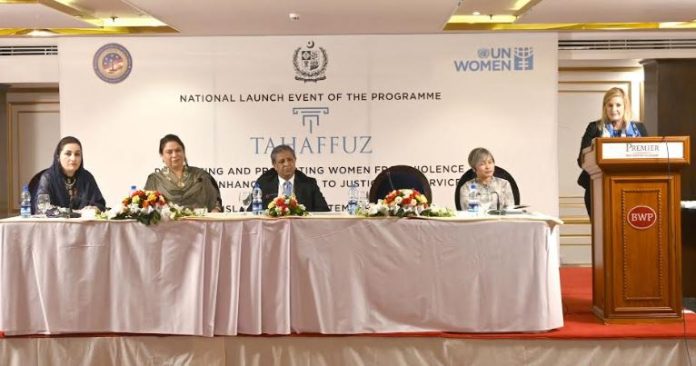 Islamabad, 14 Sept: /DNA/ – UN Women in collaboration with the Ministry of Law & Justice and completely funded by the Bureau of International Narcotics & Law Enforcement (INL) of the US Department of State, jointly launched the initiation of a programme “Preventing and Protecting Women from Violence through Enhanced Access to Justice and Services, TAHAFFUZ”. The programme, which focuses on preventing violence against women and enhancing their access to justice will be implemented in 5 districts of Punjab and Sindh, as well as the Islamabad Capital Territory from 2022 till 2024.

UN Women Deputy Country Representative Jacqui Ketunuti welcomed the distinguished participants and introduced the TAHAFFUZ programme to the audience. She said, “Building on the successes of the previous phase of this project, UN Women will address the issue of violence against women (VAW) through a holistic approach, targeting all the key stakeholders from government institutions, justice and security sector officials, as well as civil society. Using gender and social inclusion strategies, the programme will ensure VAW is addressed from all angles and institutions that facilitate women in accessing justice are strengthened to deliver accessible, quality and gender-responsive services.”

The programme aims to tackle the issue of violence against women (VAW) in a holistic way through evidence-based legislation & policy interventions, strengthening capacity of duty bearers, enhancing coordination and increasing awareness.

While addressing the National Launch Event of the Programme, INL Director Lori Antolinez said, “the U.S. government is awarding $1.5 million to UN Women to help Pakistani women better access justice and legal services via TAHAFFUZ. This continues years of INL’s support and partnership with the Pakistani government, Pakistani citizens, and UN Women.  In 2016, INL was the sole funder for Phase One of the UN Women program, providing $3.5 million.  Gender inclusivity and women’s empowerment in law enforcement and criminal justice is a top priority for INL in Pakistan.  INL supports programs to improve women’s access to justice through improved law enforcement response to gender-based violence.  More and better trained women law enforcement professionals mean superior delivery of justice to Pakistani women.”

During the life of the programme, TAHAFFUZ will strengthen capacity of law enforcement officials through improving knowledge and attitudes on gender, enhancing handling of cases of VAW along with improved coordination between security and justice sector stakeholders, forensic officers, and medical examiners.

In his keynote address, Federal Minister for Law and Justice Mr. Azam Nazeer Tarar highlighted the steps taken by the Government of Pakistan towards preventing and protecting women against violence. He thanked INL and UN Women for extending their support, said, “Many progressive laws have been enacted in Pakistan and a strong legislative framework exists – we need to make sure it is implemented in letter and spirit so that the citizens of our country, especially the women, are able to benefit from it. This programme will help create a safe and enabling environment for women and girls so that they may play an active role in national progress and sustainable development.”

This year marks the 40-year anniversary of partnership between INL and Pakistan under the banner of “Justice, Security, and Prosperity,” with more than $1 billion invested over four decades by the United States government to improve public safety and enhance law enforcement, prosecutorial, and judicial capacity across Pakistan.