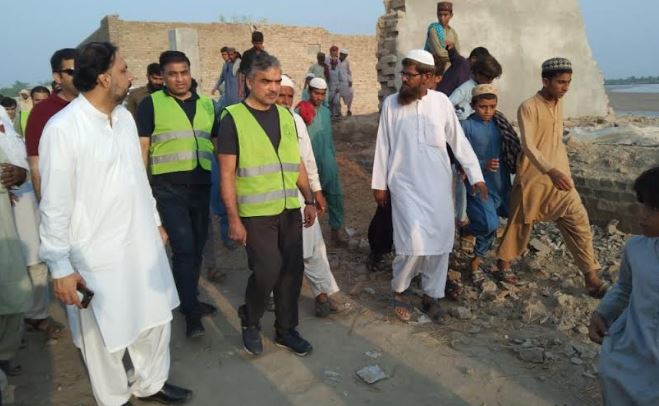 LAHORE: A delegation of the Pakistan Industrial and Traders Associations Front (PIAF), consisting of LCCI and PIAF executive committee members, led by its Chairman Faheem Ur Rehman Saigol visited the flood-affected areas in Southern Punjab.

The delegation visited various remote areas of the flood-hit areas and met with flood victims in the far flung villages and got details of the damage caused by the flood where they distributed food items, other edibles, cash and gifts to the flood victims.

On this occasion, raising serious concerns over the worst performance of the NDMA and other government departments, the PIAF Chairman called upon all governments institutions, NGOs and volunteers to offer their expertise and leadership to rescue, evacuate, and rehabilitate the affectees by providing them shelter, food and medical facilities.

He said that people are seen marooned in batches in the midst of flood water all around, pleading for food, water and shelter. He complained that the people were taken by surprise with no warning and were left with no time to save their livestock and belongings. For them all has been lost. No doubt the armed forces have done a good job in rescuing the people to safety, he added.

Currently, it was the cotton-picking season, which provides an opportunity for livelihood to thousands of women and men, but due to the crop destruction, they could not find employment. He further briefed millions of farmers and laborers have been pushed into poverty by the rains. He said estimates of losses suggest the country will return to the international market to make heavy imports of the cotton commodity this year to run textile mills, which earn around 60 percent of the total export proceeds of the country. He projected that the country would barely produce 5 million bales of cotton this year compared to the pre-rainfall estimate of 9 million bales. Pakistan has to import around 8 million bales to meet textile mills’ demand this year, he anticipated.

On this occasion, he said that people lost everything and now facing hunger, diseases and another catastrophe. Millions of people are waiting for our help in the flooded areas. In this hour of trouble, the business community is with the flood victims and will help them in every possible rehabilitation. He added that we did not learn any lessons from the 2010 flood and did not build water reserves and dams in the country; if we had built water reservoirs and dams, we would not have been so destructive today and could have saved water to cure future crops.

Faheem Ur Rehman Saigol said that the PIAF would continue to fulfill its responsibility, as it has always played its role at all testing times and credit goes to its members who gave maximum donations for the help of the deprived people.