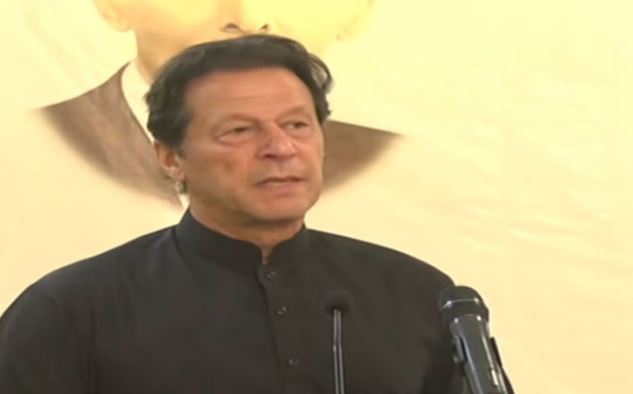 Urges nation to stand up to smash shackles of slavery

DNA
ISLAMABAD: Pakistan Tehreek-e-Insaf (PTI) Chairman Imran Khan said that it was a good thing that the conversation was leaked; however, he added that the US cypher should now also be made public so that the nation could see the magnitude of the conspiracy.
Speaking at the convention on the subject of economy, foreign policy, human rights and terrorism, Imran Khan said that Shehbaz Sharif’s government was behind the audio leak, adding that it was very good that they have done.
He demanded the government release to cypher to the public so that people can know the reality behind the cipher. “If the cypher is released, people would come to know that grand conspiracy that was hatched to oust him,” he added.
“I have not even played on it yet. Now we will play when they expose it,” he maintained, adding that it was against the Official Secrets Act, therefore he was thinking to take the matter to the court.
PTI Chairman said that there was an intellectual revolution in the state of Madina, adding that Allama Iqbal was awakening people through poetry.
Imran Khan made it clear that they have to break the shackles of slavery because society without freedom cannot fly, adding that unfortunately, Pakistan has not yet become a welfare state.
“I saw the principles of the welfare state in Britain then I decided that if Allah gives me the opportunity, I will follow the principles of the Madina state,” he added.
Imran Khan went on to say that health cards was a great blessing for poor families because they could not afford treatment charges. However, he said that look at the callousness of Maryam Nawaz, who advised Shahbaz Sharif to close the health cards because the project benefiting Imran Khan politically. He stated that Pakistan was economically well-developed country in 1960 but afterward, the country was plunged into serious economic crisis due to flawed policies of the corrupt rulers.
He said that the absconder who ruined the country economically was brought to back to fix the economy, adding that industries were shutting down and exports were on rapid decline.
PTI Chairman said that how the country would made progress when corrupt mafia was busy in looting the country’s wealth, adding that even things were not happened in Banana Republic. He said that During the Musharraf era, when Nawaz Sharif was arrested, he ran away with the NRO, adding that Nawaz Sharif and Zardari became billionaire and made the country indebted.
Imran Khan said that the morality of the country was being destroyed, Maulana Rumi said that ‘when the nation stops distinguishing between good and bad, it destroys’.
He said that they had very good relations with China, because of Corona, China was completely closed for two years. He said that these thieves played havoc with the country during the last five months.
Chairman PTI added that one lakh Kashmiris have been martyred, have you ever thought about them, unfortunately there is a slave mentality, they do not understand these things.
He said that the regime change has been decided in Pakistan, adding that it was surprising that the agencies have started considering them as enemies and the senior journalists were being treated like enemies.
“It is surprising that the agencies have stood with the thieves, as Shehbaz Gul was stripped naked and tortured,” he added.
Imran Khan said that the nation has to stand up for its rights to break the chain of salve to get the real independence.