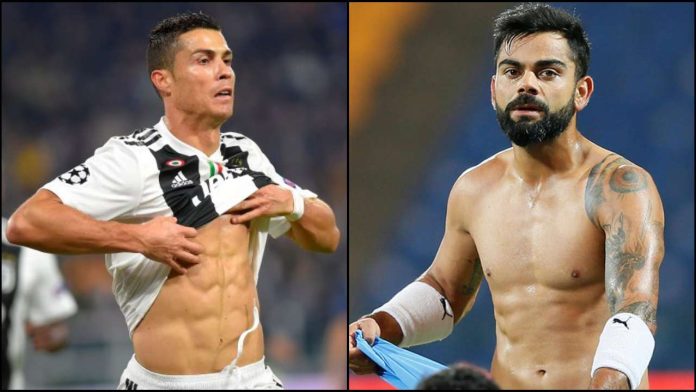 Morocco became the first African and Arab country to reach the tournament’s semi-finals with a 1-0 victory over Portugal on Saturday night.

The 37-year-old Portuguese star faced criticism after his side’s dismal show in the knockout stage. Ronaldo couldn’t control his tears at the final whistle and left the pitch as this was also his last World Cup.

Being an athlete and one of the biggest supporters of star footballer, Kohli must have felt the pressure Ronaldo was going through.

“No trophy or any title can take anything away from what you’ve done in this sport and for sports fans around the world,” wrote Kohli who left India’s all-formats captaincy following immense criticism on his leadership.

“No title can explain the impact you’ve had on people and what I and so many around the world feel when we watch you play. That’s a gift from god. A real blessing to a man who plays his heart out every single time and is the epitome of hard work and dedication and a true inspiration for any sportsperson. You are for me the greatest of all time,” added the star batter.

As a captain, Kohli also failed to win any tournament trophy. Ronaldo’s dream to win a World Cup also ended after a loss to Morocco.

The two athletes are one of the most followed ones in their respective sports.

Youssef En-Nesyri leapt high in the air to head home the game’s only goal just before half-time at the Al-Thumama Stadium to strike a significant blow against football’s established order and book a semi-final on Wednesday against either England or France, who meet later on Saturday.

It was also one of Morocco’s better performances in Qatar, full of determined defending and canny counters, keeping at bay a collection of world stars despite losing key defender Nayef Aguerd to injury before the match and his back four partners and captain Romain Saiss early in the second half.

Morocco, again noisily encouraged by the majority of the 44,198-strong crowd, and immediately went into defensive mode as Portugal attacked from the outset.

A fourth-minute free kick for Portugal from wide on the right was swung into the penalty area, and met by Joao Felix’s diving header, producing a fine save from Yassine Bounou.

But the supply quickly dried up thereafter as Morocco closed the passing lanes and frustrated the Portuguese attackers.

Joao Felix had two more half chances in the first half but Morocco gained in confidence and found a sudden spring in their step, frequently breaking on the counterattack.

Left-back Yahya Attiat-Allah made several surging runs down the flank, presenting Selim Amallah with a good chance in the 35th minute, which he was unable to convert.

But seven minutes later, a high ball from the fullback into the Portuguese box was met by a towering header from En-Nesyri, outjumping both goalkeepers Diogo Costa and defender Ruben Dias to hand Morocco the lead.

Portuguese frustration was evident as they swarmed the Argentine referee Facundo Tello at the end of the first half, complaining that several penalty appeals had been turned down.

Morocco came close to a second goal four minutes into the second half as Jawad El Yamiq got a touch to Hakim Ziyech’s in-swinging free kick but Costa was in place this time to block.

Ronaldo’s entry in the 51st minute was met with a loud chorus of jeers, but he did inject new energy into the Portugal side for whom Goncalo Ramos, the hat-trick hero of their 6-1 win over Switzerland in the previous round, missed with a close-in header in the 58th minute.

But his side, to the delight of their raucous support, held out for a famous victory.