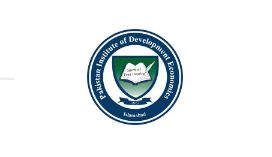 ISLAMABAD, JUN 21 /DNA/ – We are short of 10 million housing units” has been the clarion cry in politics, media, and donor-driven research for the last ten years.   Given an average household size of well over six persons, nearly one-third of the population is without housing.  Do we see such a vast number of people living on footpaths, side roads, under bridges, or in any open area? Thankfully, No! We cannot find any clarity on where this colossal figure of 10 million housing shortage came from!

Media (print, electronic and social) uses it, referring to it as a World Bank estimate. At the same time, various World Bank publications quote a report submitted to the State Bank as the source, along with a study done by the International Growth Centre (IGC) (a DFID-funded global research effort out of the LSE and Oxford).

This was revealed in the latest research titled “The Assumed Shortage of Housing in Pakistan” by the Pakistan Institute of Development Economics (PIDE) published in PIDE’s monthly issue P & R.

While meeting with a group of journalists, Dr. Nadeem ul Haque, a renowned Economist & VC PIDE, and Dr. Durre Nayab, Pro-Vice-Chancellor PIDE, said that the IGC report cites an SBP report, but interestingly, the said report gives a lower per annum figure than the one quoted by the IGC. A more recent State Bank document gives no e and cites the number as a given. Some WB documents refer to a House Building Finance Company Limited’s presentation as the source but nowhere does one find the exact method used to reach the oft-repeated number.

The worst part is that the government also uses this estimate without questioning its validity. And sadly, we have based policy on this assumption and initiated a significant public housing effort at considerable cost.

Dr. Nayab said that a few indicators to judge the housing conditions include congestion or crowding, security of tenure, provision of civic amenities, structural quality, and cultural adequacy. The Pakistan Social and Living Measurement (PSLM) survey, conducted by the Pakistan  Bureau of Statistics (PBS),  provides us with the opportunity to look into most of these factors, and we do so using its 2019-2020 round. Since urban and rural Pakistan exhibit quite different trends, we look at them separately, along with some provincial patterns.

She elaborated that using the definition given by the UN-Habitat, “a house is considered to have a sufficient living area for the household members if not more than three people share the habitable room that is a minimum of 4m in the area “. The 4m was rightly upgraded to 9m, as the measurement was too small. We do not get room sizes in the PSLM, but the number of living rooms is covered in the survey. Since nine sq2   is a typical size even in informal settlements, we would estimate congestion by the number of persons per room.

Dr. Nayab further added, that our estimates suggest that 4.37 million households, equaling 12.3% of the total households, live in congested conditions, with over two-thirds of these in rural areas (3.04 million).  Young children generally live/sleep in their parents’ room, so we do not include children aged five years and half-count those under 12 years while estimating occupancy per room.

So, if congestion is the rationale behind the 10 million housing deficit, our estimates give a much lower number.

On the occasion Vice-Chancellor PIDE Dr. Nadeem ul Haque said that there is certainly not a “deficit of 10 million housing units” in Pakistan. There may be “inadequate housing” in the country, but not a “housing shortage’. The deficit is in the quality of life in the houses, not the absence of housing units.  Even if we consider the country’s high fertility rate and rising population, the additional demand of 0.7 million households every year, as suggested by the IGC study (2016), is very high. Going by the mean household size, it means an additional 4.5 million people need accommodation- an estimate that appears far from reality. The mean age of the head of the household in Pakistan is 44 years. Given the cultural milieu, young adults do not generally live on their own, thus suppressing the demand for additional housing that could have been there because of the youth bulge.

He said that the notion of housing shortage, and the belief that it creates employment, have led the government to push for an unsubsidized construction sector. Along with fiscal pressure, it has created an unnatural demand in the real estate market. And while the ‘shortage’ is more in the rural areas, all the housing initiatives are taking place in the urban areas. A forthcoming PIDE study on sectoral productivity over the last decade also shows the construction industry to ng the least productive one. Any protected/subsidized industry remains unproductive, and the construction industry proves to be no exception.

Dr. Nadeem ul Haque said that Migration from rural areas is another reason for increased housing demand in urban areas.  It is a movement that we at PIDE support; instead of considering it as a problem, we believe that growth happens through cities. Better urban planning and supporting large-scale, mixed-use housing can go a long way in providing quality, affordable accommodation to people. Doing so would deal with whatever housing shortage and, more importantly, tackle the quality issue.

PIDE has also shown that the housing shortage arises from the harsh zoning laws and building regulations favor cars and single-family homes.