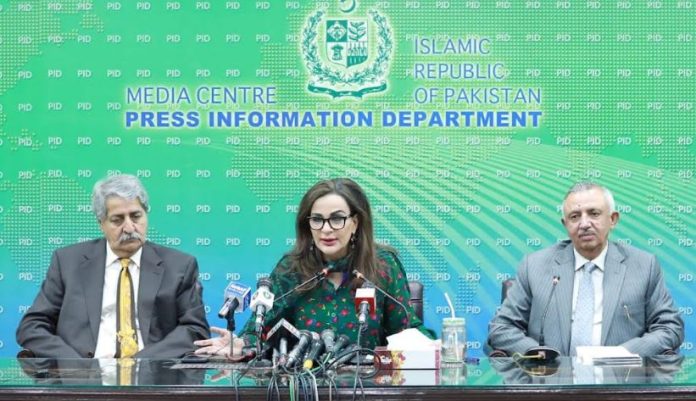 ISLAMABAD, AUG 31 /DNA/ – While addressing the media in a press conference, Federal Minister for Climate Change Senator Sherry Rehman highlighted that “Pakistan has never seen a disaster of such epic proportions in living history. These are moments of extreme fragility for the country.”

Minister Rehman further stressed, “This is an all-hands on deck crisis, and we cannot rest until the huge needs and relief gap on the ground is met. None of us are sleeping much because we are painfully aware of the anguish millions of our people are in. In such times of distress, we should avoid the politics of polarization and  division in a country under severe public stress.

“We are entering the 9th week of this flood catastrophe, and it is devastation unlike we have ever seen before. Even despite a huge concerted relief effort, which was delayed because of the hard rain not letting helicopters take off, the affected population is well over 33 million. They all need shelter, water to drink, hygiene kits and cooked food.We are grateful for civil society activists and philanthropists who are coming forth in big numbers now. We need everyone to help.

The rains in Sindh and Balochistan have surpassed 30-year averages and have taken more than 1191 lives, with well over 33 million severely affected. More than 5000 kms of roads and 243 bridges have been destroyed, and nearly a million homes have been fully or partially damaged. The north too is badly affected, with the Indus rising via the Kabul River. The task of rebuilding in places has already begun, but it will be a mammoth task. If we are to build back better, it will honestly require more than the 10 billion USD that is being talked about. Climate resilient infrastructure is expensive, and requires scientific designing, with fortifications to withstand climate shocks. The same will be the case for crops. Right now Sindh’s crop is almost all wiped out.

“Next stage will be health management because the flood-hit will be exposed to water-borne diseases. This could soon become a health disaster. We are under-resourced at the moment, but we implore everyone to donate as much as possible to reliable organisations. We have repurposed our funds to service the relief effort including the BISP cash transfers to deal with the immediate calamity. It is still not enough. All of us must stand united in the face of this devastation.”

Answering a question on Shaukat Tareen’s phone calls which attempted to scuttle the IMF deal, she said “it unfortunately still seems like PTI is practising personal politics; the leaked audio calls are a glaring example. The fact that they didn’t deny its contents says it all. Not having the country’s best interest in the middle of a crisis is unheard of. The entire PPP has been in jail at one point or another, but at the worst levels of torture no one has ever tried to subvert national goals. This kind of politics is both dangerous but also shockingly self-serving. If the IMF deal had not gone through, were they ready to take Pakistan towards default?  This isn’t some playground for politics; people’s lives are at stake. There are formal forums to discuss economics and provincial resource distribution issues you might have, but trying to sabotage a crucial IMF deal at a time when the country is facing multiple crises, shows Khan’s politics to be shockingly self-regarding at the expense of its people, of its state. There surely could have been enough time for politics? Was this the time?

Seeing the focus shift from the millions affected by the flood is quite shocking. On social media, there is nothing but abuse, both personal, sexist and political by an army of opposition bots, whereas the time and focus should be on giving relief where one can. It feels as if, after 1971, this might be the most vulnerable moment in Pakistan’s history. The Prime Minister has also extended an  olive branch to the Opposition, but they continue both abuse and division. We need to unite to amplify our relief efforts a thousandfold.

Minister Rehman, while discussing the global community’s role, said, “We are at the ground zero of this climate catastrophe created by the GHG emissions of richer countries.  These floods have crossed all limits of the devastation caused in 2010. Temperatures in Sindh had crossed 53 degrees which are unlivable. Surely, we need to adapt better, in not building close to river beds, or better drainage, but that is not why the deluge took place. Make no mistake, climate change has caused this catastrophe. Even the UN acknowledges that. It is now a question of whether we have the long term will and resources to adapt better.