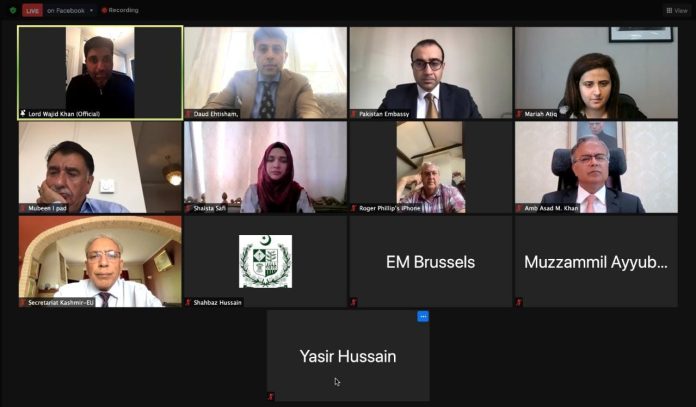 The Embassy of Pakistan Brussels organized a webinar on the eve of Youm-e-Istehsal Kashmir today, to express its firm support to the people of the Indian illegally occupied Jammu and Kashmir (IIOJ&K).

The webinar was aimed at highlighting the Human Rights violations and Demographic Reengineering in the Indian Illegally Occupied Jammu and Kashmir (IIOJ&K) by the Indian government, especially since August 5, 2019.

In his remarks, the Ambassador apprised the audience about the unabated atrocities being committed by the Indian security forces, especially after illegally revoking the special status of the IIOJ&K on 5th August 2019. He underscored that the Indian government has converted the occupied territory into the world’s largest open prison by curbing the liberties and civil rights of the 8 million innocent Kashmiris.

Ambassador Khan emphasized that the post-August 5 2019 legislations including a series of new domicile laws are designed to change the demographic structure of the disputed territory in breach of the relevant United Nations Security Council Resolutions and the Fourth Geneva Convention.

While highlighting the grave human rights situation in the IIOJ&K, the Panelists called upon India to stop abusing innocent Kashmiris who were suffering under its illegal occupation for over past seven decades.

The webinar was live streamed on missions social media handles and it was attended by a large number of Pakistani and Kashmiri diaspora, including a cross-section of academics, media and scholars.