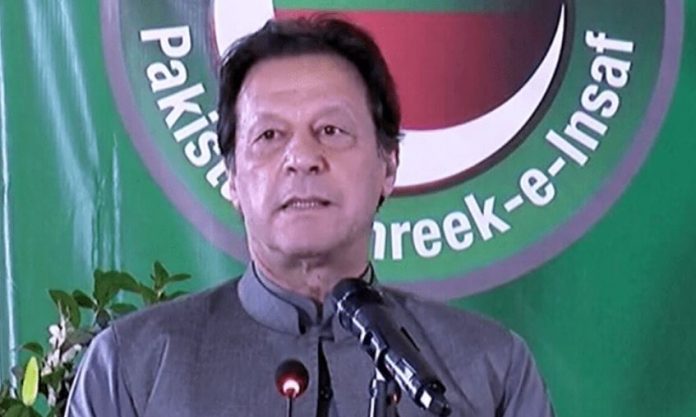 ISLAMABAD: Former prime minister and PTI Chairman Imran Khan Thursday explained the meaning of foreign funding, stating that according to the verdict of the Election Commission of Pakistan (ECP), donations collected from overseas Pakistanis is considered foreign funding.

Addressing his party workers present at the FP park through a live video link, Khan said that no law prohibits political parties to collect money from overseas Pakistanis. “PTI collected money from companies in 2012 and the law prohibiting this action was formulated in 2017; therefore, no law has been violated,” he said, adding that this is not foreign funding.

Khan had called a “peaceful protest” outside the ECP headquarters today in the federal capital following the body’s verdict related to the party’s prohibited funding case.

The party chairman had first asked the supporters to stage a ‘peaceful protest” against CEC Raja outside the ECP headquarters; however, after warnings from the coalition government barring them from entering the Red Zone, the venue was changed to FP park.

“Islamabad has been made a fortress, why are they doing this?” he said, adding that the federal capital was closed at once.

The former prime minister said that it is a constitutional right of everybody to protest, and “we [PTI] has always tried to protest with the constitution and the law.”

Regarding PTI’s rule, Khan said that when the party came into power, it was given a terrible economy and then the COVID-19 pandemic happened.

“Our government managed both difficult situations successfully,” he said, lamenting that despite the efforts, the PTI’s government was removed from power through a controversy.

Khan went on to say that they [coalition parties] thought that the PTI was finished because of their “conspiracy” in the wake of the no-confidence motion.

“However, they were mistaken because people took to the streets on May 25. I will never forget the massive turnout of PTI supporters,” he said, recalling that the coalition government made all efforts to stop them by inducing fear in them.