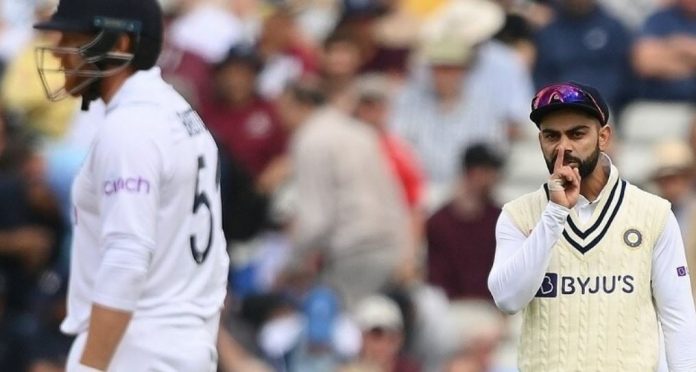 India’s media came down heavily on their star cricketers on Wednesday after England romped to a seven-wicket victory in the fifth Test, calling the bowlers too wayward and questioning Virat Kohli’s place in the side.

After being in control, India were bowled out for 245 in their second innings, setting England a record target of 378 runs that the hosts reached with ease.

Joe Root smashed an unbeaten 142 and Jonny Bairstow hit 114 not out as England cruised to their highest Test run-chase with two sessions to spare at Edgbaston.

When play began on Tuesday, England needed 119 runs and early strikes could have swung the momentum in India’s favour.

“But the visitors were simply too flat, and their bowlers too wayward,”.

The paper noted that in the last two away Tests against South Africa, Indian seamers, billed as the “best ever”, had failed to bowl with intensity or accuracy in the fourth innings.

Former captain Kohli, 33, has been going through a prolonged lean patch and has not hit a century since 2019 and The Hindu daily said it was time India addressed the elephant in the room.

“Their next Test is in December, but will Kohli do what a Cheteshwar Pujara did and play enough first-class cricket in the meantime to rediscover his touch and form?” the paper asked.

The English-language daily was all praise for England, hailing them as “magnificent”.

“Joe Root’s century must rate as one of the finest, full of grace and power and mischief. And with Jonny Bairstow in such stunning form, they deserved to win,” it said.

The daily said India suffered in the absence of “Shazball”, the previous combination of Ravi Shastri as coach and Kohli as captain, a spinoff on “Bazball” — the nickname for the aggressive brand of cricket played under England’s new coach Brendon McCullum and skipper Ben Stokes.

India were led by seamer Jasprit Bumrah in the Test for the first time in the absence of Rohit Sharma, who tested positive for Covid-19.

“Yet one can’t shake off the feeling that India reneged on Shazball, and a captain leading for the first time was placed in a difficult position,” The Hindu said. “Gone was the aggression and command of the Virat Kohli years — although the then-captain did go over the top often — and the team is left with more questions than answers.”“In touch, in the divinest touch of his career, he flows as smoothly and serenely as a river. If Bumrah cannot stop him, perhaps no one could. That the Indian seam maestro came not even remotely close to troubling him, let alone dismissing him, captures the story of Root’s incredible mastery. “