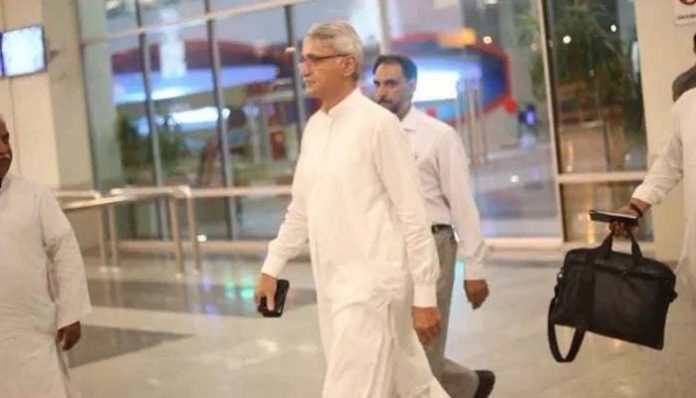 LAHORE: After a hiatus of seven months, PTI leader Jahangir Tareen landed back in Pakistan at Lahore’s Allama Iqbal International Airport on Friday.

Tareen, who arrived with his son Ali Tareen, returned on an Emirates flight from London via Dubai.

While speaking to media at the airport, Tareen dismissed speculation about his reasons for leaving Pakistan, saying he has been going abroad every year for a medical checkup for the last seven years.

The PTI leader, who has been criticised heavily by the Opposition over his alleged involvement in the sugar scandal, said on his return: “It is the Opposition’s job to hurl allegations and I do not feel that there is a need to reply to them.”

“Thanks to the Almighty, all my business is clean,” he asserted.

Not against the government

Hours after his arrival, Tareen clarified in a tweet that his company, JDW Sugar Mills, was not part of any petition against the Punjab government’s decision to commence sugar crushing on November 10.

“All my mills, including those in Sindh, will start crushing on the 10th,” he asserted. “[I] will play my part in helping the government overcome [the] sugar shortage and price hike.”

Once Prime Minister Imran Khan’s closest confidante and the main sponsor of the PTI’s operations, the former PTI secretary-general is believed to have been aggrieved at the way he has been treated by those who are considered the eyes and ears of PM Imran Khan.

Known for his acumen and sharp political skills, Tareen is credited by his allies and foes both for helping the PTI for several years when there was hardly anyone else around to do the heavy lifting. He is credited with spending his own money to help the party gain media mileage and to make inroads in other parties ahead of the general elections two years ago.