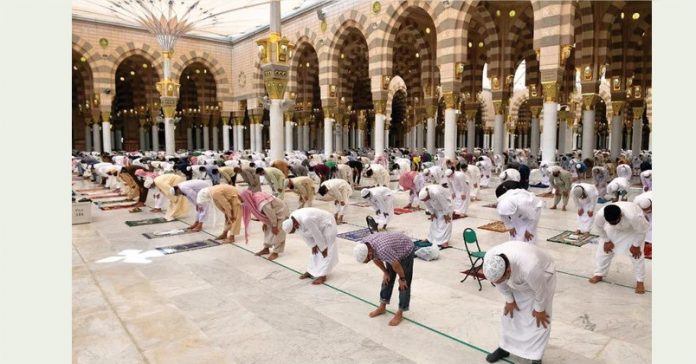 MADINAH: Hundreds of thousands of worshippers attended the first Friday prayers to be held at the Prophet’s Mosque in Madinah since the gatherings were suspended to stop the spread of the coronavirus disease (COVID-19) outbreak.

The green light for the resumption of the prayer meetings came as part of a plan to gradually reopen the Kingdom’s mosques while ensuring worshippers and visitors adhered to preventive measures.

A ban on access to the Rawdah remained in place and only groups of worshippers numbering up to a maximum of 40 percent of the mosque’s capacity were being allowed entry.

Precautionary measures also included the allocation of specific doors for the entry of worshippers, the installation of thermal cameras, removal of all carpets so that prayers could be performed on the marble, sanitization of the mosque’s floors and courtyards, periodic opening of domes and canopies to ventilate the mosque, and the removal of Zamzam water containers.

The Prophet’s Mosque in Madinah will be closed after evening prayers and reopened one hour before dawn prayers. Parking lots will operate at 50 percent capacity and a media awareness campaign has been launched to highlight safety procedures at the holy site.

Medical teams have also been stationed at the main entrances to the mosque in cooperation with the Ministry of Health.

On May 31, Saudi authorities reopened all mosques for prayers, except in Makkah, as part of the Kingdom’s plan for a gradual return to normal life.

Last week the minister of Islamic affairs, dawah and guidance said that the country’s mosques were ready to welcome back worshippers, following his field trips to check that necessary preparations had been made.

All worshippers must still maintain a distance of 2 meters between rows, wear masks to enter a mosque, and Friday sermons and prayers have been limited to a maximum of 15 minutes.