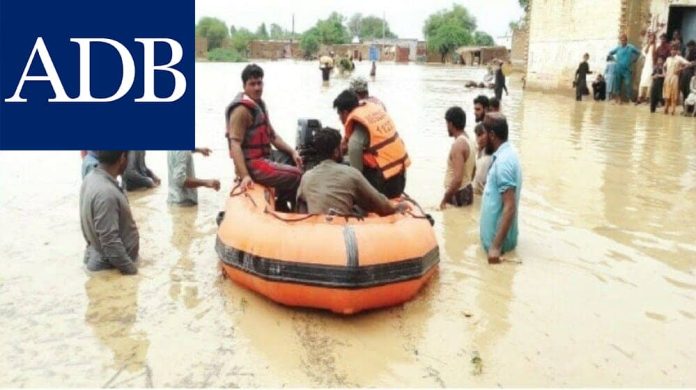 ISLAMABAD, A $554 million financing package, including new and reallocated funds, has been approved to support recovery and reconstruction efforts in Pakistan following this year’s devastating floods, and to strengthen the country’s disaster and climate resilience.

The financing, which includes a $475 million loan and a $3 million technical assistance grant from the Asian Development Bank (ADB), and a $5 million grant from the Government of Japan, will support the restoration of irrigation, drainage, flood risk management, on-farm water management, and transport infrastructure in the flood-affected provinces of Balochistan, Khyber Pakhtunkhwa, and Sindh, according to a statement issued by the Bank on Monday.

ADB’s Emergency Flood Assistance Project will also incorporate climate and disaster resilience measures into the design of the infrastructure. ADB has repurposed an additional $71 million from existing loans to support the government’s flood-response efforts.

“This year’s floods, which affected 33 million people and brought enormous damage to infrastructure and agriculture, are a devastating reminder of Pakistan’s acute vulnerability to climate change,” said ADB Director General for Central and West Asia Yevgeniy Zhukov. “This project will help to rebuild critical infrastructure in affected areas and restore rural livelihoods.”

After unprecedent heatwaves in April to June 2022, Pakistan suffered a prolonged and intense monsoon that led to the country’s worst flooding in a century with glacial lakes bursting, rivers breaking their banks, flash flooding, and landslides. A post-disaster needs assessment conducted by the government and development partners, including ADB, estimated total damage and losses at more than $30 billion and recovery and reconstruction needs at $16.3 billion.

The loan will reconstruct about 400 kilometers (km) of roads; about 85 km of the N-5, the country’s busiest national highway; and about 30 bridges. It will also help to restore and upgrade irrigation and drainage structures including canals and on-farm water facilities to restore livelihoods, and strengthen flood risk management structures to mitigate future risks to agricultural land, communities, and assets.

“More people are expected to fall into poverty as a result of the floods and the food-insecure population is likely to double to more than 14 million people in the most affected districts,” said ADB Principal Transport Specialist Zheng Wu. “In close coordination with the government and other development partners, this project will provide crucial support to restore agriculture and other priority infrastructure to support socioeconomic recovery from floods.”

Funded through the Japan Fund for Prosperous and Resilient Asia and the Pacific, the $5 million grant will support staple crop cultivation in Balochistan and provide at least 60,000 farm households with higher quality, certified rice seeds for increased productivity over 54,000 hectares of land. The grant will also support women’s livelihoods in agriculture by providing farming equipment.

The $3 million technical assistance grant will support the implementation of the project and the preparation of an ensuing flood risk management investment.

In October, ADB approved a $1.5 billion loan to support the government’s provision of social protection, food security, and employment to mitigate the adverse impact of cumulative external shocks. The program partly contributes to the floods response given that a portion of the program beneficiaries are also flood victims.