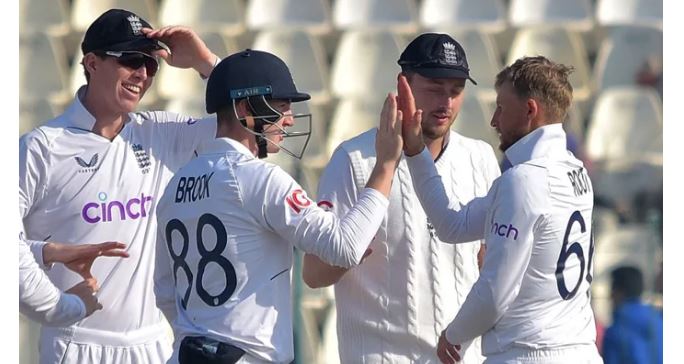 MULTAN: England beat Pakistan by 26 runs in the second test in Multan on Monday to take an unassailable 2-0 lead in the three-match series.

Chasing 355 for victory, Pakistan were all out for 328 in the second session on day four of the contest.

Saud Shakeel topscored for Pakistan with a valiant 94, while Imam-ul-Haq made 60.

Mark Wood was pick of the England bowlers, claiming 4-65 as England registered their first series win in Pakistan since 2000-01.

England will conclude their first test tour of Pakistan since 2005 with the third and final match beginning in Karachi on Saturday. ‘Not up to the mark’

Speaking after the match, Pakistan captain Babar Azam said, “To be honest, we were not up to the mark in the first innings.”

“There were a couple of soft dismissals and…in the second innings we fought well but could not finish.”

He said that this Test will be memorable for Abrar Ahmed. “He used conditions very well in the first innings and after that, he bowled well.”

The skipper expressed hope to perform well in Karachi.

“We had a simple plan to carry on the momentum, we had good partnerships between Imam and Saud and then Saud and Nawaz. The tail also fought well, but we didn’t finish well.

On the other hand, English captain Ben Stokes appreciated the mystery bowler, saying he bowled fantastically.

“Things happened quickly this week compared to last week,” England captain Ben Stokes said, referring to their victory in the opener in Rawalpindi.

“It was a tricky wicket for slower bowling. We were fortunate that with the cracks opening up our seamers became effective.”

Harry Brook was adjudged player of the match for scoring the only hundred of the low-scoring match.

Earlier, when the day started Faheem Ashraf got out after scoring 10 runs. Later, Mohammad Nawaz and Saud Shakeel played responsibly and took the team closer to target before losing their wickets.

Saud Shakeel was the last man out just before lunch. He scored 94 runs and was given out in a decision called controversial by several former cricketers including ex-Pakaistan skipper Waqar Younus.