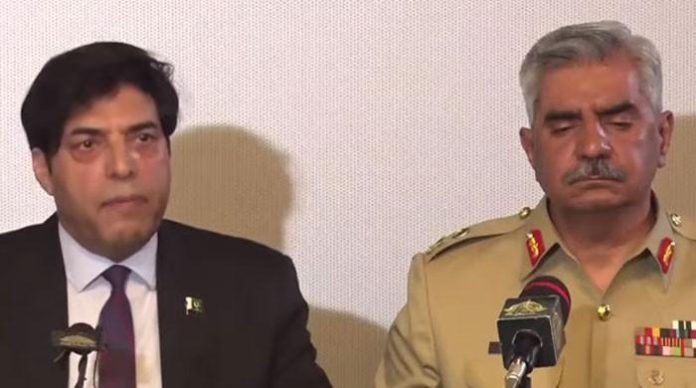 Not possible that you meet COAS at night and call him traitor in day: DG ISI

Taking the lead during the joint presser flanked by DG ISI, Lt Gen Babar said rather Pakistan Army and Arshad Sharif had cordial relations. Arshad used to cover ISPR media-related activities and he even conducted numerous programmes on Shuhada (martyrs) and the institution.

General Babar said his institution held no grudge against senior journalist Arshad Sharif despite the fact that he carried an extreme narrative on cipher controversy. Arshad Sharif made strong comments regarding the army during this time, but  “We did not have any negative sentiments about him and we don’t have such feelings now.”

DG ISPR while shedding light on the killing of journalist Arshad Sharif in Kenya and the circumstances surrounding it, said this press conference is being held in the context of presenting facts so that “facts, fiction and opinion can be differentiated.”

Prime Minister Shehbaz Sharif had been “specially informed” about the sensitivity of the press conference as well, he said, adding,  it is quite imperative to determine the factors due to which a particular narrative is being built and people are being misled.

Terming the death of Arshad Sharif as a “very tragic incident,” Lt Gen Iftikhar said Sharif was an icon of Pakistani journalism, a martyr’s son and a martyr’s brother. His programmes will be seen as a role model for other journalists, he added.

“Former government offered army chief an extension for an indefinite period in his term in order to fail the no-trust motion but he turned down the offer,” said Lt Gen Anjum. He also wondered if the commander-in-chief was a traitor then “why was he praised endlessly in the recent past”.

“If the army chief is a traitor in your eyes, why did you want to give an extension in his term, why do you still meet him secretly,” asked the DG ISI.

“The leaders of the institutions debated on the matter for several days and the institution decided after deliberating on every aspect that we will remain restricted to the constitution,” said the DG ISI.

He said that the people who were part of this decision included those who will be leading the army for the next 15 to 20 years.

On his appearance in the press conference, DG ISI said that he was forced to come in public after he saw the lies that are being spread conveniently and are becoming acceptable.

“I broke the silence when I saw that there was a risk of ‘fitna, fasad’ in country and institution just because lies were not being declared lies,” he said.

DG ISI said that when Sharif was in Pakistan, he was in contact with the institution and maintained contact even when he travelled abroad. He also shared that he is in contact with his Kenyan counterpart on the matter of his death.

“We are not satisfied that is why the government has formed the inquiry team,” said the DG ISI. He added that the members of his agency were deliberately removed from the inquiry committee.

On the same point, Director General Inter Services Public Relations (ISPR) Lieutenant General Babar Iftikhar that the military had decided not to include ISI and Military Intelligence officials in the probe as unnecessary fingers were being raised at the institution.

The DG ISPR made the comments during an unprecedented press briefing with DG ISI on the death of senior journalist Arshad Sharif in Kenya. Lt Gen Anjum was invited by the military spokesperson considering the “sensitivity of the matter”.

“The purpose of this press conference is to inform you about the death of prominent senior journalist Arshad Sharif in Kenya and the circumstances surrounding it,” DG ISPR had said at the start of the press conference.

‘People have been misled’

The head of the military’s media wing said that there is a need to examine the “under which a false narrative has been made and people have been misled”.

“Institutions, leadership and even the chief of army staff has been accused without a reason to create an extraordinary chaotic situation,” said the DG ISPR.

Lt Gen Iftikhar said that Sharif’s death was a “very tragic incident”. He called the senior journalist an icon of Pakistani journalism, a martyr’s son and a martyr’s brother and a serving officer’s brother-in-law. His programmes will be seen as a role model for journalists, he added.

“Since Arshad was an investigative journalist, he also looked into the cypher issue when it surfaced,” shared DG ISPR. He also highlighted that the journalist had also interviewed then prime minister Imran Khan on the issue, adding that at the time it was claimed that he was shown the document.

“Facts linked with the cypher and Arshad Sharif’s death need to be found. So there is no ambiguity left in this regard,” said the DG ISPR.

The DG ISPR said that the facts linked with the cypher and Arshad Sharif’s death need to be found, so there is no ambiguity.

The spokesperson of the military also shared that the army chief has discussed the cypher with the PTI chief at Kamra, adding that Imran Khan had said it himself that the document “was not a big deal”.

“It was surprising for us when Imran Khan in March 27 rally flashed the paper in an effort to give a narrative which was not linked with the reality in any way was made in a dramatic way,” said the DG ISPR.

Lt Gen Iftikhar said that several facts regarding the cypher have surfaced, so far, which have exposed the “hollow and fabricated story”. He added that the opinion of a Pakistani envoy was used by the former prime minister for his political interests.

The military spokesperson said that the ISI in a “very clear and professional way” informed the National Security Committee that they had found no evidence of any type of conspiracy against the government. He said that the NSC was briefed that it was the envoy’s personal assessment and the strategy envoy had recommended, the NSC recommended the same strategy to the Foreign Office.

“ISI’s findings related to the cypher didn’t have any evidence for any type of conspiracy,” he said, adding that all these findings are on record. He added that the military wanted these findings to be put before the nation but they left the decision to the PTI-led government, but it was not done.

“Instead, more false news and rumours were spread in order to take political benefit and to create a specific narrative the no-confidence motion was a part of regime change operation instead of a constitutional, political and legal affair,” said the DG ISPR.

“Pakistan’s institutions and especially the army leadership was targeted and it was linked with treason and regime change operation,” said Lt Gen Iftikhar.  He shared that during this time Sharif and other senior journalists were fed with a specific narrative.

While mentioning ARY news, the DG ISPR said that during the media trial the private TV channel acted as a spin doctor in spreading the false narrative against the Pakistan Army and leadership.

“Pakistan Army was expected of political interference which is against the Constitution. The word ‘neutral’ was made an abuse,” said the DG ISPR. He added that the institution and army chief showed extreme restraint and patience despite all this.

“We made every possible effort that these politicians sit together and solve national issues but it was not possible,” said the DG ISPR. He added that Sharif, social media activists and others spoke about the cypher and very “serious” things were said about it.

“Arshad had been doing programmes on ARY which had serious criticism against the different institutions since December 27. But despite this, we did not have any negative feelings for him nor do we have it now,” said the DG ISPR.

He said that the threat alert seemed like an act to force Sharif to leave the country.

Lt Gen Iftikhar shared that Khyber-Pakhtunkhwa government issued a threat alert regarding Sharif on August 5, 2022.  He added that this alert was issued on special directives of KP Chief Minister Mahmood Khan.

He said that the threat alert seemed like an act to force Sharif to leave the country.

“Salman Iqbal told [Senior Executive Vice President ARY News] Ammad Yousuf after Shahbaz Gill’s arrest to send Arshad out of the country,” he said, adding that the ARY CEO should be brought back to Pakistan and made part of the investigations into the death of the journalist.

“We all should wait for the formation of an inquiry commission. Have confidence in your institutions. We have been washing the mistakes of the past with blood for the last 20 years. We can make mistakes but we can’t be traitors or conspirers,” said the DG ISPR.

To question, the military spokesperson said that the probe into Sharif’s death “should be totally unbiased”. He added that unnecessary fingers were being pointed at the institution.

Lt Gen Iftikhar stated that they have information regarding Sharif’s death but are not making it public at this point.”Third-party can be involved in Arshad Sharif’s matter. We will assist in every possible way if needed in Arshad Sharif case,” he said.

Responding to a question, DG ISPR said that Sharif was in contact with him and other military officials. He also shared that the journalist never mentioned the threat to him or anyone else.  Lt Gen Ifitikhar shared that the military had investigated the threat issued by the KP government but they could find no evidence related to it.