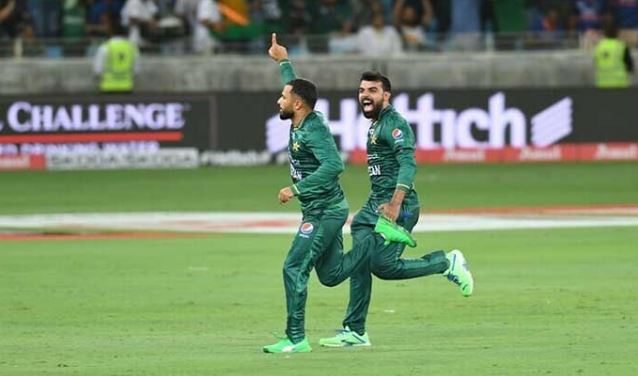 Dubai – Coming to bowl in his second spell, Nasim Shah dismissed Surayakumar Yadav (18 off 18), picking up his second wicket, during the second match of Asia Cup 2022 at Dubai Cricket Stadium in the United Arab Emirates (UAE).

After a shaky start, Virat Kohli began to play some delightful shorts but was removed by Nawaz on 35 (35 off 34), playing cautiously. While skipper Rohit Sharma was dismissed on 12 (12 off 18 balls) by Nawaz, after he conceded six from Sharma.

Before this, Nasim Shah started the proceedings with the beauty to send KL Rahul (0 off 1) back to the pavilion without troubling the scorecard.

Virat Kohli (who is under pressure) joined captain Rohit Sharma and was dropped on 0 by Fakhar Zaman in the opening over of Shah. Earlier, Pakistan batters have struggled to smoke runs as the Indian bowlers while testing the patience of the Green Shirts crumbled Pakistan to 147 all out.

Pakistan have lost Babar (10 off 9), Fakhar (10 off 6), while Iftikhar (28 off 22) was departed on a bouncer delivered by Hardik Pandya. For India, Bhuvneshwar bagged four, Pandya got three, Arshdeep obtained two, while Avesh took one wicket.

Mohammad Rizwan made his way back to the pavilion after scoring steady (43 off 42) as Pandya removed the 30-year-old batter. Pandya continued to surprise the batting line of Pakistan as he also managed to get rid of Khushdil Shah (2 off 7) with short ball.

The under pressure Pakistan was looking for the ‘fireworks’ from Asif Ali’s bat he could only managed to score (9 off 7) as Bhuvnewshwar bowled cleverly.

Arshdeep also grabbed his maiden wicket against Pakistan by getting rid of all-rounder Mohammad Nawaz (1 off 3).

For India, Bhuvneshwar, Arshdeep and Pandya bagged a wicket each. Bhuvnewshwar showed brilliant performance with the bowler as in the 19th over he removed Shadab Khan (10 off 9) and Nasim Shah.

The tailender, Shahnawaz Dahani surprised the spectators as he clobbered two massive sixes, contributing 16 runs (16 off 6), but was removed by Arshdeep Singh. While Haris Rauf remained unbeaten on 13 (13 off 7).

India captain Rohit Sharma won the toss and elected to field first in a high-voltage battle against arch-rivals Pakistan during the second match of Asia Cup at the Dubai Cricket Stadium.

Though, Pakistan have faced two big blows as the main pacers – Shaheen Shah Afridi and Mohammad Wasim Jr – have already been out of the Asia Cup with injuries.

In their last encounter in ICC World Cup 2021, Pakistan clinched victory against India comprehensively by a margin of 10 wickets.

It is pertinent to note that Afghanistan national cricket team stunned the Sri Lanka cricket team in the yesterday’s encounter by a victory margin of 8 wickets.