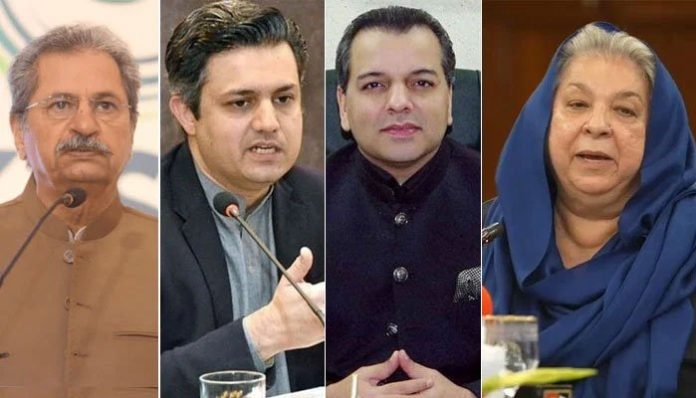 LAHORE: An anti-terrorism court (ATC) in Lahore issued on Friday the non-bailable arrest warrants of 12 PTI leaders, including former federal minister for education Shafqat Mehmood and Yasmin Rashid, for allegedly vandalising and damaging property during the party’s long march.

The other PTI leaders whose arrest warrants have been issued include Hammad Azhar, Murad Raas Zubair Niazi, Mehmoodur Rasheed, Aijaz Chaudhry, Aslam Iqbal and others.

The warrants were issued over Shahdra police’s request.

Multiple PTI leaders including Chairman Imran Khan, Vice Chairman Shah Mehmood Qureshi, General-Secretary Asad Umar, Imran Ismail and others were booked for “rioting” during the party’s May 25 long march. However, the Imran Khan, Asad Umar and some other leaders acquired bails in these cases.

Amid the shelling by the police during PTI long march on May 25, former energy minister Hammad Azhar was injured and was provided with basic medical treatment at a rural health clinic.

Taking to his official Twitter handle, the senior PTI leader recorded a video message claiming that the police have now resorted to direct attacks.

Earlier, in order to restrain Lahore’s rally from entering Islamabad, the police tried to arrest Azhar; however, party workers managed to save him.

The PTI leader had confirmed that failed attempts were being made for his arrest. He had also reported that the police have abused the workers and hundreds of shells had been fired.

On the same day, the police attacked former health minister Yasmin Rashid’s car, breaking her windscreen in an attempt to stop her from moving forward.

According to footage circulating on social media, the police used batons to stop her; however, the car continued to move ahead despite losing balance.

The police also encircled her car when a PTI supporter came forward and verbally abused the officials. Meanwhile, Yasmin tried stopping the police from taking away her car keys.

Rashid, in a statement, confirmed that the windshield of her vehicle was broken by the police. She said that she faced difficulty in leaving the area.

“This government has lost its senses. I am an 80-year-old woman. Why are they threatening me? How is stopping a peaceful protest democratic?” she had questioned.