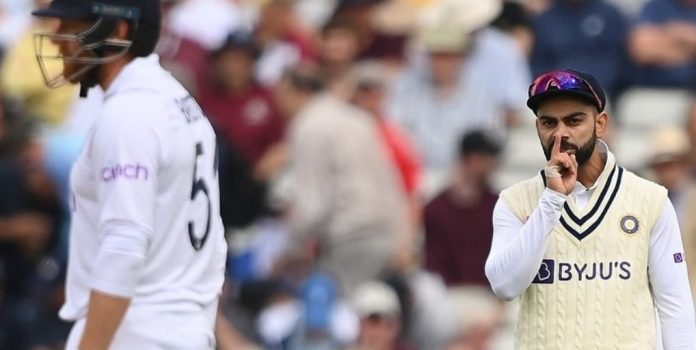 Edgbaston: Jonny Bairstow led England’s fightback with a counter-attacking unbeaten 91 to guide the hosts to 200-6 in reply to India’s 416 on day three of the rescheduled fifth Test at Edgbaston on Sunday.

Ben Stokes was dropped twice in the morning session but the England captain could not capitalise on the reprieves and departed for 25.

An on-field altercation with India’s Virat Kohli appeared to fire up Bairstow who registered his fourth consecutive Test fifty and remained on course for his third century in four innings.

Sam Billings was on seven when rain forced early lunch with England still 216 behind.

Stokes, on 18, came dancing down the track to Shami but miscued the ball and Shardul Thakur dropped the skier at cover much to the bowler’s dismay.

Thakur suffered Shami’s agony when Bumrah dropped a sitter at mid-off to give Stokes another let-off.

Bumrah immediately redeemed himself, however, by taking a stunning diving catch when Stokes repeated the cavalier shot to Thakur’s next delivery.

Bairstow refused to retreat into his shell and continued to attack the bowlers as he did in the home series against New Zealand last month.

The best illustration of his superb touch was when he pulled Mohammed Siraj from outside the off-stump for the first of his two sixes.

Bairstow was adjudged lbw to Thakur on 81 but the batsman reviewed the decision and replays confirmed an edge before the ball hit his pad.

India are 2-1 up in the series which could not be completed last year following Covid-19 cases in the India camp ahead of the final match at Old Trafford.