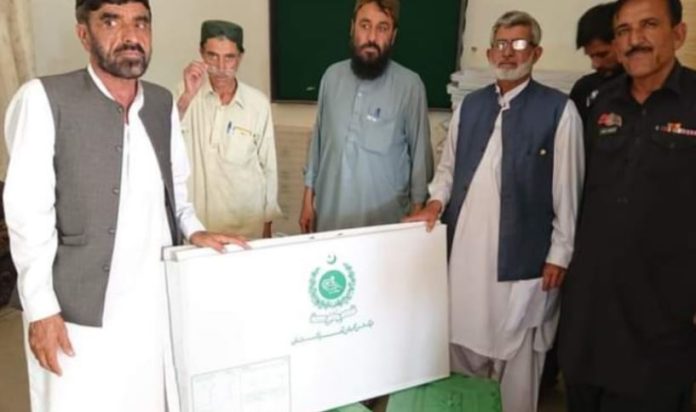 Quetta: Some reports of violence emerged as local government elections continued in 32 out of 34 districts of Balochistan on Sunday. At around 2pm today, a blast was reported outside a women’s polling station in the Mengal Union Council of the Nushki district. Later, SP Abdul Saboor Shah confirmed that it was a grenade attack. Fortunately, no loss of life was reported, he said.

According to the Election Commission of Pakistan (ECP), voting is being held in 4,456 urban and rural wards in which 16,195 male and female candidates are contesting elections. One-hundred-twenty-one candidates have been elected unopposed in urban and 1,463 in rural wards.

The schedule for polls in the remaining two districts, Quetta and Lasbela, will be announced later as delimitation for the elections was under way there following an increase in constituencies by the provincial government.

Sources said these wards were located in Gwadar, Kech, Pasni and some other districts of the province, where the election would be held later once the security situation improved.

For the first time in the province, as many as 132 female candidates are contesting directly on general seats where they are facing male candidates. Most of these women belong to Kohlu district, from where 22 females are in the field, followed by 21 from Kech district.

The ECP has set up 13,533 polling booths in 5,624 polling stations, of which 2,034 stations have been declared “very sensitive” and 1,974 “sensitive” where special security arrangements have been made.

Of all, 576 polling stations have been set up for men, and 562 for women, whereas 4,088 stations are non-segregated. In total, as many as 3,552,398 registered voters would use their right to vote in today’s elections.

Earlier today, Balochistan Chief Election Commissioner Fayyaz Hussain said that all the election-related arrangements at the polling stations have been completed and a heavy contingent of security forces — including the army, Frontier Corps (FC), police, Levies, Anti-Terrorist Force and Rapid Response Force — has been deployed in all 32 districts.

The provincial government has also formed an election monitoring room in the Islamabad Secretariat. Residents can register their complaints by calling 051-9204402-03 or 051-9210837-38, Hussain said. “We are determined to ensure that voting in Balochistan is held in a transparent and fair manner,” he vowed.