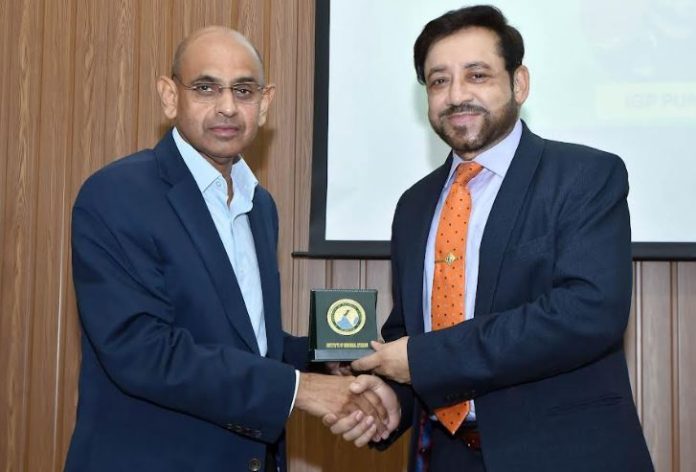 ISLAMABAD: Former Inspector General of Police Dr Kaleem Imam called for concerted efforts to fight terrorism in Pakistan. He was speaking at an event titled ‘Terrorism and State Response’ organized by the Institute of Regional Studies (IRS) here on Friday.

Imam termed maintenance of law and order, prevention and detection of crime, provision of security, prosecution of criminals, and countering organized crime as essential in a state’s response to terrorism. He shared that between 2017 and 2020, the law enforcement agencies (LEAs) in Pakistan had conducted 375,000 intelligence-based operations (IBOs). Listing the achievements of Operation Radd-ul-Fasaad in 2020, Imam shared that it had resulted in the freezing of assets and check on the movement of members of 78 terrorist organizations and killing of 353 terrorists. He added that Pakistan had come down from 6th in the Crime Index Ranking to 106th as a result of all the successes of the government against terrorism. He also listed the signing of the Paigham-i-Pakistan edict by 1,800 religious scholars as a success in countering religious extremism and promoting tolerance.

Imam emphasized both hard and soft interventions for countering terrorism in Pakistan. In terms of soft responses, he called for participative political processes, dialogue, socio-economic development, and reform for countering terrorism and extremism. In terms of hard responses, he emphasized the importance of modernization of the LEAs, formation of a rapid response force, and formulation of a counter-terrorism department.

Commenting on the legal developments related to terrorism, Imam mentioned the Suppression of Terrorists Act 1975, the Anti Terrorism Act 1997, the Regulations Action in Aid of Civil Powers 2011, the Fair Trial Act 2013, the Punjab Protection of Vulnerable Persons Rules 2015, and the Prevention of Electronic Crimes Act 2016. Highlighting the importance of police action against terrorist organizations, Imam cited the findings of a study conducted by the US Rand Corporation. He shared that the study had found out that 40% of terrorist groups had ended through joint police/intelligence operations.

Reiterating some of the key points of the NISP 2022-26, Imam shared that the NISP 2022-26 asserted that the security of Pakistan rested in the security of its citizens. Therefore, it prioritized national cohesion and prosperity of people, stressed upon guaranteeing fundamental rights and social justice without discrimination, and called for promoting delivery-based good governance through strengthening of institutions, rule of law, transparency, accountability, and openness. He added that economic security was at the core of security. He stressed that a sincere and robust approach was needed to sustain our past efforts and respond to tackle upcoming challenges.

Commenting on the Financial Action Task Force (FATF) grey-listing, Imam said that after complying with the 34-point action plan proposed by the, Pakistan was on the way out of its grey list. He added, however, that the grey-listing of Pakistan had cost the country $10.3 billion each year.

In his concluding remarks, President IRS Ambassador Nadeem Riyaz called for improving governance, establishing rule of law and social justice, and ensuring the economic security of the general public to prevent extremist ideologies from taking hold in the society. He added that addressing the social, economic, ideological, and psychological causes were as important as the law enforcement responses.