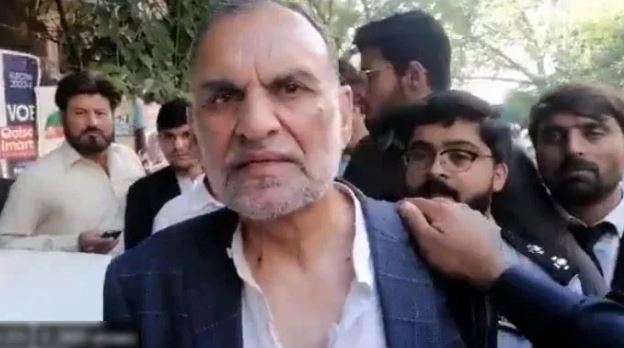 ISLAMABAD, OCT 15: A district and sessions court on Saturday extended the physical remand of PTI leader Azam Khan Swati for one day in a case related to controversial tweets.

The Federal Investigation Agency (FIA) sought an eight-day extension in the remand of the PTI senator which the court refused and granted one more day to the authorities to complete the investigations.

Azam Swati was taken into custody by the FIA’s Cybercrime Wing (CCW) from his home in Islamabad on Thursday after which he was presented before senior civil judge Shabbir Bhatti’s court in the federal capital which approved a two-day remand.

The agency’s cybercrime wing registered a case against Swati later over the “controversial” tweets.

The former federal minister was presented in court earlier in the day after the completion of his physical remand with several hours of delay.

Swati was supposed to be presented before Judicial Magistrate Muhammad Shabbir’s court after the completion of his two-day physical remand this morning. However, he wasn’t presented till the afternoon.

During the hearing, the FIA officials requested the court to grant an eight-day extension in Swati’s physical remand. They submitted the case file to the judge upon his inquiry.

The prosecution also presented the record of Swati’s “controversial tweets” in the court.

The special prosecutor maintained that they will also present anything in Swati’s favour that surfaces in the records.

“The said tweet is not the only tweet as Azam Swati has posted such tweets earlier as well,” he said, adding that the FIA have records of the planned tweets from Swati’s official account.

The prosecutor requested for an extension in Swati’s physical remand saying that the FIA has to recover the Twitter account’s password. He also informed the court that Swati wasn’t cooperating in the interrogation.

After the completion of Abbasi’s arguments, Awan maintained that the defence admits that Swati tweeted but there is legal cover.

“I have told Azam Swati to not say anything now,” he said.

“If you want to check anything, check his [Swati’s] wounds,” said Awan while referring to the alleged physical torture on the PTI leader during custody.

Earlier, Swati’s counsel Babar Awan complained that he has been waiting since 8am in the morning, but FIA hasn’t presented the PTI leader in court yet.

The FIA officials informed the court that Swati was undergoing a medical examination and would be presented in court after it.

At the outset of the hearing this morning, Awan maintained that Swati had to be presented in court today as his physical remand has completed. He said that the court had ordered a medical examination of Swati at the last hearing.

At this, the court remarked that the security personnel hasn’t arrived yet.

“They might have taken the suspect to the hospital,” the judge observed.

The judge told Awan to sit in his chamber or leave any associate lawyer in court and that they would be informed when Swati arrives.

Awan maintained that he will inform the court about the sections applied in the case against Swati.