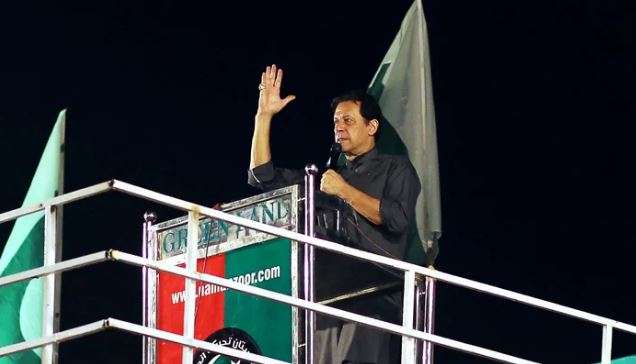 LAHORE, OCT 15: The outcome of by-polls on three National Assembly and three provincial assembly seats in Punjab on Sunday will be a popularity test for former prime minister Imran Khan where his party is ruling.

The party is expected to win out of six seats up for grabs in the country’s political heartland, according to a report.

The hallmark of the 2022 by-polls is that PTI Chairman Imran Khan is contesting all the NA seats except one that is NA-157, where the party has fielded Meher Bano Qureshi, the daughter of party vice-chairman Shah Mehmood Qureshi against PDM’s candidate Ali Musa Gilani.

According to the Election Commission of Pakistan, a total of 101 candidates from different political parties and independents are taking part in the vote: 52 in Punjab, 33 in Sindh and 16 in KP.

Around 4.472 million voters are registered in these constituencies. The ECP has established 1,434 polling stations in Punjab, 979 in KP and 340 in Karachi.

Local people see a very tough contest here. Nearly 10 years ago, in early 2012, Ali Musa Gilani, son of former prime minister Syed Yusuf Raza Gilani, won an NA seat from Multan that was vacated by Shah Mehmood, who had joined the PTI by then.

Ali Musa in that contest bagged around 90,000 votes.

Meher Bano Qureshi Qureshi is running for the seat left vacant by her brother Zain Qureshi, and the PTI will face a litmus test here.

Dr Shizra Mansab is running against Imran Khan in the NA-118 by-election. She won this seat in the 2014 by-poll when it fell vacant as a result of her father’s death. She defeated PTI candidate Brig Ejaz Shah from here, and Brig Ejaz Shah won the seat in 2018.

After his resignation, the seat has fallen vacant again and Imran Khan has fielded himself from here.

Besides, Imran Khan is also contesting from Faislabad’s NA-108, the seat from where PML-N’s Abid Sher Ali tasted defeat for the first time in 2018 at the hands of PTI’s former student leader Farrukh Habib.

Farrukh Habib won that seat with a margin of less than 2,000 votes, but under the prevailing circumstances when the PML-N central government has been under immense criticism for its inability to deliver, the result on this seat in Pakistan’s top industrial city could go in favour of the PTI.

Most of the people living in Faisalabad are associated with small and major industries, whereas the issues like power outages and economic challenges have hit them directly and this could go against the PML-N.

Former MPA Iftikhar Bhangu is the PML-N candidate in Sharaqpur in Sheikhupura, district against Mian Abubakar Sharaqpuri, a close relative of former MNA, MPA, and district nazim Mian Jaleel Sharaqpuri, who is now in the PTI.

This seat is considered a secure seat for the PTI for some reasons, including the increasing vote bank of the Tehreek-i-Insaaf as well as the spiritual following of Jaleel Sharaquri’s group.

Similarly, in PP 241, Bahawalnagar, the PTI is facing a tough competition from the PMLN where Aman Ullah Bajwa, the brother of sitting PML-N MNA Ahsanul Haq Bajwa, is contesting against Muzaffar Awan of PTI.

In this seat, the ruling party in Punjab has to go the extra mile to defeat the PML-N.

Rest assured the PTI is likely to win most of the seats in Punjab due to a variety of factors, including loadshedding and inflation, which have added to the PML-N’s woes.

From Khanewal, PP-209 is a seat where a by-poll is taking place and the seat was won by Faisal Niazi of the PML-N in 2018.

Faisal Niazi joined the PTI and resigned from the membership. He is now the PTI candidate and has been challenged by PMLN’s Ziaur Rehman.

Rao Arif, the candidate of Tehreek-i- Labbaik Pakistan. The PMLN won this seat with a margin of around 16,000 votes in 2018 and it is quite obvious that it has a strong vote bank here.

Nevertheless, the factors that damaged the PML-N in July 2022 by-poll still exist and the results are also quite likely to have a noticeable impact on Sunday’s by-elections, as the PTI is still enjoying an edge and taking full advantage of the PML-N government’s weaknesses and inability to live up to the expectations of the people.