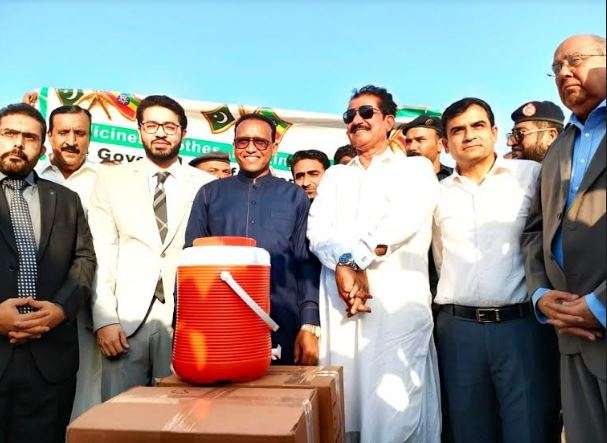 ISLAMABAD, OCT 16: Jemal Beker, Ambassador Extraordinary and Plenipotentiary of Ethiopia to the Islamic Republic of Pakistan visited flood affectees in the Tent City District of Sindh Province where he distributed basic food, medicine, shelter, and non-food items to more than eight thousandaffectees in the vicinity. Tent City is a two-hour drive from Karachi. On my way to the city, I was just thinking about what kind of life, pain, and agony these people undergoing.

Ambassador said that it is very sad and painful to comprehend where one-third of the country was inundated with water, more than 1600 precious life lost, 1.7 million houses destroyed, women give birth in the tent, 800 thousand livestock, majority of crops were devastated, schools, health facilities, and infrastructures destroyed that heavily affected the livelihood of people beyond imagination.

Upon my arrival at the Tent City, I was received by a crowd of people composed of elderly men and women, youth and children. Looking into their face and eye, I am old enough to comprehend the agony and suffering they are undergoing for the causes they are not part of it. Coming out of my car, I extend my hand and gave strong hugs to the children around me just to express my empathy and sympathy with them while scanning the camps and visualizing the magnitude of the suffering. Related to this, I have noticed one thing the Pakistani people have strong and solid hearts and growing hope to survive, revive and recover and eagerly wait for their return to their place. But I have just asked myself one question, what would be left over in their locality upon their return nothing but debris and begin life from zero that has further worried me a lot. Certainly, I have learned that the worst is yet to come when looking into the situation there is likely hood of a disease outbreak that would significantly hurt the already victimized society. Truly speaking, Pakistan can not alone address the unfolding scenarios and the international community must redouble its effort and ensure justice.

Indeed, Pakistan became ground zero for climate change calamities for the causes where its share is minimal, however, it suffers the most. Looking into the causes of climate change, developing countries like Pakistan and my Country Ethiopia contribute smallbut the main causes are developed countries’ greed, and resistance to adjust their actions as to the scientific advice and warnings costs the world a lot. Today Climate change became a reality in which all states and non-state actors should oblige to adopt the doctrine of do-no-harm and refrain from their wrongdoing that aggravated the unfolding fiasco on planet earth. It is clear that today’s human sufferings were caused by the self-centered, state of nature of developed State’s behavior that polluted the environment and disrupted the ecosystemthat brought us here.

Therefore, it is imperative for developed countries to avail climate finance, technology, and capacity building for developing countries like Pakistan to mitigate and adapt mechanisms that help to create a resilient economy. To this end, it is mandatory to extend and redouble the effort to mobilize the funds to rescue, recover, rebuild and reconstruct the nation and ensure justice.

At this time of agony, the Government of Ethiopia and its people would stand in solidarity and share the pain and suffering with their brotherly people of Pakistan. Indeed, my visit to the flood affectees area of Tent City is a new experience for me where I observed the real challenge unfolding, and we need to prepare for the worst.

On the other hand, Ambassador Jemal Beker held a productive discussion with the Tent City administration, elders, and religious leaders that helped meto understand the reality on the ground and the alarming situations that need to be addressed by the international community collectively.

Finally, Ambassador Jemal Beker along with other officials distributed basic foods, medicine, shelter, water, biscuits, and toys to the children. During this distribution activity, one thing said by the middle-aged man captured my attention: ‘Ethiopia-Pakistan’ zindabad.