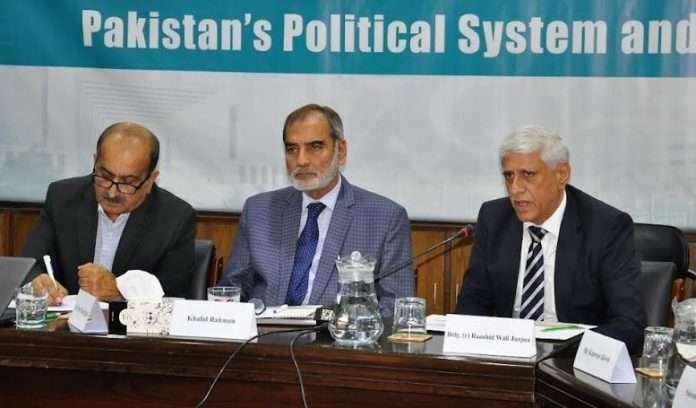 ISLAMABAD, OCT 21 /DNA/ – Governance weaknesses and problems in Pakistan are direct outcome of prevalent duality in its power structure, run by different de jure as well as de facto entities. This duality bearing on civil and military establishments, in non-compliance with constitutional obligations, has thrown the democratic political system out of equilibrium.

This aspect of the political system, along with several others, was discussed in the Grand National Dialogue on Pakistan’s political system and governance, organized jointly by the Institute of Policy Studies (IPS), Islamabad, and the Islamabad Policy Research Institute (IPRI).

The trichotomic power branches have failed to fulfil their constitutional obligations as a result of the pseudo-parliamentary system of Pakistan, which has some presidential features. This, along with the lack of political will and duality of the political system, doesn’t befit the constitutional values, argued Ahmad Bilal.

The solution demands a constitutional framework with objective criteria to measure the performance while the military’s role in the political processes should be adjusted according to constitutional and democratic values.

In addition to these fissures, as indicated by Abu Ahmed Akif, there are inherent flaws in political practices and the organizational structure of the system, leaving little or no space for governance. The anomalies of the system, ranging from the buildup of elitist capture to the electoral flaws and the bureaucratic role, have removed any margin for reforms and governance strategy, he pointed out.

Reckoning on this, Dr. Rashid Aftab rested his view that within the three-tiered governance structure – federal, provincial, and local government – a prominent trend has been the absence of devolution of power according to change in time, due to reluctance of the provinces.

While it goes against the 18th Amendment, which has validated Article 140-A, obliging the provincial government to devolve power, a participatory governance system, focusing on empowering local government institutions, must be achieved.

As the economy forms a major part of this organizational and governance structure, Zaheeruddin Dar shared his insights on economic governance while giving denotation to ease of doing business, which has been hitting the skids because of increasingly higher return expectations from investors due to increasing war, political instability, cultural, and corruption risks.

Another factor is the government ownership of businesses. He viewed this as a route to the creation of monopolies and hostile takeovers. He further stressed focusing and pushing forwards the private sector with a visionary approach to build successful economic governance and a welfare-oriented system.

Particularly relevant, or rather the foundation, of the political system, is the electoral process, the reform of which is pivotal to democratic governance. Nazeer Ahmad Mahar shared his findings on electoral reforms, and stated that the 2018 elections, conducted under a rather empowered ECP, saw a 30% increase in voter registration and turnout.

However, there is still a gap in women and youth participation in selecting a representative for the governance and political system. According to the 2017 census, youth form 64% of the population while the 2018 election saw a 13% deficit in youth voters.

These findings signify the development of the Election Amendment Bill, which has been pending in the Parliament since 2020, innovative approaches to mobilize women and youth participation, and electoral reforms targeting trust deficit among the public, elections credibility, and ECP strategic leadership.

For electoral and other reforms, e-governance is becoming inexorable. If not employed, it can increase cyber security and other risks. Although Pakistan has improved in the EGDI Index by three spots ranking at 150/193, there is still a lot more space for improvement in Telecom Infrastructure Index (TII) and Human Capital Index (HCI), in which Pakistan stands at a medium spot. He asserted the need to develop an integrated e-governance framework based on barriers and enablers and people-centered services with an inclusive design.

In the backdrop of these aspects, Raashid Janjua, while highlighting the military’s stance, suggested that the country needs to develop a model or framework entailing the public, civil, and military concordance based on a new social contract. He further recommended a reconceptualization of civil-military relationship.

Concluding the session, Khalid Rahman stressed the timely recognition of the problems, while accepting the issues with a strong willpower to combat them. There has been a lack of proactive and positive energy, and more blame game on institutional failures. Though global indexes provide general indications, Pakistan needs to develop indigenous ranking systems and performance measures for development, he argued. For political and governance improvement, citizen training, strengthening of value-based framework, opportunity-seeking approach in crises situations, and local government empowerment serves as effective solutions.=DNA