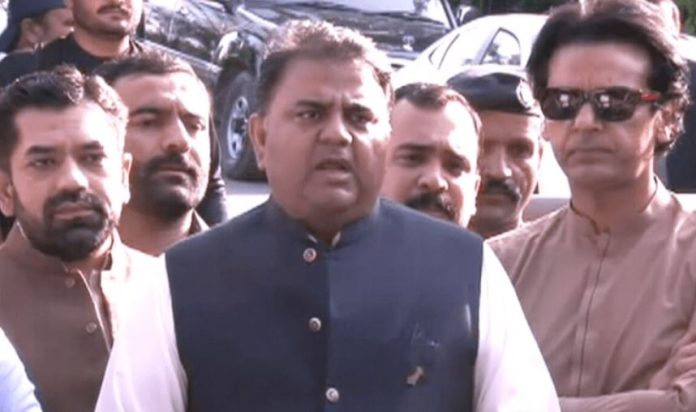 ISLAMABAD, SEP 17: PTI leader Fawad Chaudhry on Saturday said party organisations across the country have been ordered to come out and protest against rising inflation and reiterated the party’s demand for snap elections as the PTI’s tug of war with the government continued on the matter.

Talking to the media in Islamabad along side Awami Muslim League chief Sheikh Rashid after a meeting of the PTI’s core committee, Chaudhry said that the panel decided to give the call to its local cells to stage demonstrations against rising prices due to the country’s current economic situation.

“If the government doesn’t move towards elections, then wait for a final call in these two weeks as consultation continues. We think workers should await a final call in September.”

Chaudhry said the core committee expressed concern about the rising level of street crime in major cities, adding that they had reached an unusually high level. He claimed factories were closing, 250-300,000 people had become jobless in the last four months and one million more people would become unemployed in the next few months.

Chaudhry said that the rupee and market were not stabilising even after the release of funds from the International Monetary Fund and criticised the finance minister and prime minister for having no solutions or plan except for “crying and screaming in press conferences”.

“The country will have elections whether the government wants them or not. The ultimate arbiter is the nation and until it doesn’t get the right to make political decisions, the PTI won’t step back from its struggle.”

Responding to a question, Chaudhry said any technocrat or interim government had no room in the Constitution and such a setup would be considered “martial law”.

He said it was in Pakistan’s interest to move towards fresh elections without any chaos, but added that the PTI would not be responsible if the situation deteriorated.

“Everything that has to happen will happen this month,” Chaudhry said.

The former information minister also addressed the flood situation, saying that the core committee had expressed regret and grief over the destruction caused and instructed the Punjab and Khyber Pakhtunkhwa governments to draft plans on how to spend what was raised in the PTI’s telethons on flood affectees.

He added that the meeting had also expressed “sheer concern” at the religious hate-based campaigns against party chief Imran Khan and ordered the PTI’s provincial governments to take notice of them and pursue legal action where merited.

Meanwhile, Awami Muslim League chief Sheikh Rashid said the government had “failed and collapsed” and elections were the only solution to the country’s problems. He said the period up to October 15 was important, without elaborating on what he meant.