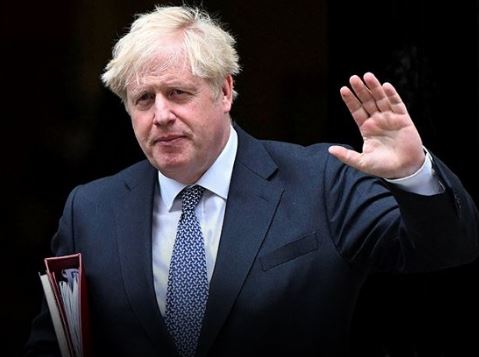 LONDON: British Prime Minister Boris Johnson was clinging to power on Wednesday, gravely wounded by the resignation of ministers who said he was not fit to govern and with a growing number of lawmakers calling for him to go.

Johnson’s finance and health secretaries quit on Tuesday, along with several in more junior roles, saying they could no longer stay in government after the latest in a series of scandals blighted his administration.

With mounting calls for Johnson to quit, he showed his determination to stay in office by appointing businessman and education minister Nadhim Zahawi as his new finance minister, and filling some of the other vacancies.

“I suspect we will have to drag him kicking and screaming from Downing Street,” one Conservative lawmaker told Reuters, speaking on condition of anonymity. “But if we have to do it that way then we will.”

The level of hostility Johnson faces within his party will be laid bare later on Wednesday when he appears in parliament for his weekly question session, and before the chairs of select committees for a scheduled two-hour grilling.

Johnson, a former journalist and London mayor who became the face of Britain’s departure from the European Union, won a landslide election victory in 2019 before taking a combative and often chaotic approach to governing.

His leadership has been mired in scandals and missteps over the last few months, with the prime minister fined by police for breaking COVID-19 lockdown laws and a damning report published about the behaviour of officials at his Downing Street office who breached their own lockdown rules.

There have also been policy U-turns, an ill-fated defence of a lawmaker who broke lobbying rules, and criticism that he has not done enough to tackle a cost-of-living crisis, with many Britons struggling to cope with rising fuel and food prices.

“Game over”, declared the headline of The Times’ leader, which added it “is a mistake” for Johnson to continue clinging to power because he “has lost the confidence of his party and the country”.

“There is no conceivable chance that Johnson, who failed to secure the backing of 148 MPs in a confidence vote last month, can recover his authority to provide the effective leadership that the country needs at a time of acute national crisis,” The Times wrote.

Inside the paper, columnist Iain Martin described the chaos within the Government as he expressed limited hopes for the newly appointed chancellor Nadhim Zahawi.

“There was a mad scramble by a deluded Team Boris as they tried to identify a person, any person, prepared to accept the second most important political post in the country and risk being the shortest-serving holder of the office of Chancellor of the Exchequer,” Martin wrote.

In the Telegraph, Ex-Brexit minister Lord David Frost said Johnson should quit his post or risk “taking the party and the Government down with him”, adding that following Tuesday’s resignations “other Cabinet ministers now need to consider whether they are truly happy with the current direction of travel”.

The Daily Express cast Johnson as “wounded” but “liberated”, with the paper’s front page saying the premier was fighting on with a vow to cut taxes.

Daily Mail columnist Stephen Glover praised the PM as “an exceptional politician who stands head and shoulders above almost all other members of the Cabinet”.

The politician will be revered for delivering Brexit, despite the “chief flaw” of “his reluctance to tell the truth, which has marked him out even in a profession not celebrated for its veracity”.

“But after all that has happened, and despite his achievements, he appears now to be a doomed Prime Minister.

Yes, what a waste and a tragedy it has been,” Glover writes.

Guardian columnist Polly Toynbee believes the manner and precise timing of the PM’s departure is the “only question left”.

“Very few expect him to fight the next election. The 1922 Committee could change the rules instantly overnight and hold another leadership vote, with all the signs that he would lose next time,” she wrote.

“Or they may wait for next week’s election of a new committee minded changing the rules to allow another attempt at defenestration within the year.”

The latest bout of drama at the heart of British power comes as the economy deteriorates rapidly, with some economists warning that the country could tip into recession.

The latest scandal saw Johnson apologising for appointing a lawmaker to a role involved in party welfare and discipline, even after being briefed that the politician had been the subject of complaints about sexual misconduct.

It prompted Rishi Sunak to quit as chancellor of the exchequer – the finance minister – and Sajid Javid to resign as health secretary, while half a dozen others left their junior ministerial or envoy roles.

“It is clear to me that this situation will not change under your leadership – and you have therefore lost my confidence too,” Javid said in his resignation letter.

Several of the ministers cited Johnson’s lack of judgement, standards, and inability to tell the truth.

A snap YouGov poll found 69% of Britons thought Johnson should step down as prime minister but for the time being the remainder of his top ministerial team offered their backing.

“I fully support the prime minister,” Scottish Secretary Alister Jack said. “I am sorry to see good colleagues resign, but we have a big job of work to do.”

A month ago, Johnson survived a confidence vote of Conservative lawmakers, and party rules mean he cannot face another such challenge for a year.

However, some lawmakers are seeking to change those rules, while he is also under investigation by a parliamentary committee over whether he lied to parliament about COVID-19 lockdown breaches.

Were Johnson to go, the process to replace him could take a couple of months.

Only two-and-a-half years ago, the ebullient Johnson won a huge parliamentary majority on a promise to sort out Britain’s exit from the European Union after years of bitter wrangling.

But since then, his initial handling of the pandemic was widely criticised and the government has lurched from one predicament to another.

Although Johnson won wider plaudits for his support of Ukraine, it has not materialised into a boost in opinion polls, which show the Conservatives trailing the opposition Labour Party and his own popularity ratings at all-time lows.

His combative approach towards the Europe Union has also weighed on the pound, exacerbating inflation which is forecast to surpass 11%.

“After all the sleaze, the scandals and the failure, it’s clear that this government is now collapsing,” Labour leader Keir Starmer said.