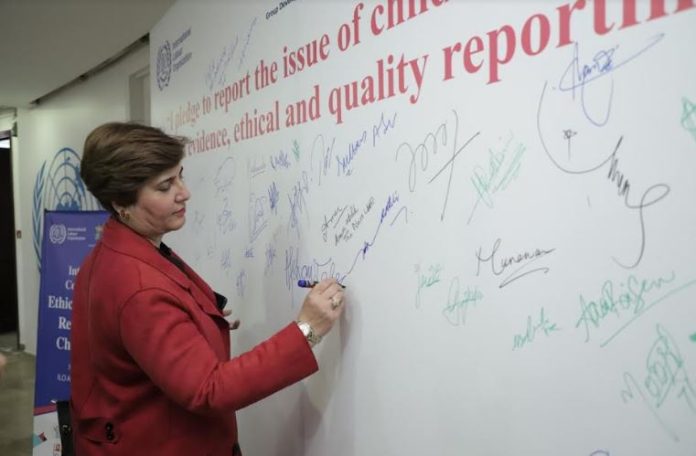 The international conference was jointly organized by Group Development Pakistan (GDP) and the International Labour Organisation (ILO) – which is a specialised agency of the United Nations (UN), whose mission is the promotion of decent work for women and men -under Asia Regional Child Labour (ARC) Programme, with the financial support of United Kingdom’s Foreign Commonwealth and Development Office (FCDO).

The international conference was part of the project Under which, GDP trained around 65 media professionals (out of whom 22 women) from Peshawar, Islamabad, Lahore, Quetta and Karachion the concept of child labour, relevant international commitments, national legal/policy framework and major developments, role of media in prevention and elimination of child labour, guidance on investigating and quality reporting related to child labour issues in an ethical, rights and evidence-based manner.

To further promote ethical journalism and assess the training impact, a media competition was organized to encourage the trained journalists to produce and publish media pieces on child labour: more than 30 pieces were produced and published, and top three stories were awarded prizes, and their work was recognized.

In the opening remarks, Mr Tomas Stenstrom, Officer in Charge, ILO Office for Pakistan welcomed the participants and congratulated the partners, donors and participants for organizing a conference on the importance of media’s role in curbing child labour.

Ms. ChristineChung, South Asia team Leaderand focal Pakistan& Kashmir, at the UNOHCHR said “The best approach requires the adults to actively seek the children’s views and treat them seriously. Media and young professionals are doing their part for protecting their rights”.

Senior journalist AounSahi highlighted that the news agenda is driven by big stories regarding politics and crime,and that little importance was given to the news related to social issues and human rights. He also called upon the key stakeholders to not share pictures of children victims of child labour and take appropriate measures to revamp the news agenda and media reporting.

Sarah Cooper, Group Head (Governance & Open Societies), FCDO said “Media can play a crucial role in combatting child labor. They can bring this issue to life. Policy makers should know that child labor is a modern form of slavery”.

The discussion was moderated by Gender & Child Rights Expert Valerie Khan. Moreover, AfshanTehseenBajwa, Chairperson, NCRC, highlighted the key role of media by recalling a story of 7 year old girl who was beaten to death and how media could play a positive role in reporting stories in a timely manner so that perpetrators could be held accountable. She also emphasized that instead of focusing on the parents, children are put in lockup for begging, where upon children become victim of a lot of abuse and she pointed out that a mechanism to deal with such issue is missing.

Kashmala Tariq, Federal Ombudsperson for Protection against Harassment of Women at the Workplaces said “Have we ever reported a child domestic labour to authorities having noticed a child is employed in someone’s home?” She called upon the citizens to join hands for collective action to eradicate child labour. She also underlined that when women are availing a safe and conducive space to work and generate an income, they will automatically not send their children to labour, but send them to school.

Towards the end of the conference, three journalists were awarded cash prizes for winning the media competition on ethical and quality reporting. KhalidaNiaz won the 1st prize, Shahid Khan won 2nd position and Fatima Nazishwon the third prize.

A special certificate of acknowledgement was also awarded to Umer Khan from Roots IBVY school who won 1st prize in a human rights story competition, out pf 279 submissions from 52 countries. Valerie Khan pointed out that encouraging young people to raise their voice in an ethical and decent manner was critical to hold perpetrators of child abuse accountable and promote solutions for issues such as child labour. She pointed out the role of academia in training and mentoring the young generation. The need to focus on a synergic, holistic approach which had to include family planning was discussed. Finally, Nadia Jamil, who joined the conference online also highlighted how child domestic labour

was feeding child sexual abuse and she called for a much more solid enforcement of child protection laws, and child protection and referral mechanisms, She explained that the responsibility of the family economic survival could never be that of a child and that parents, adults and state actors had to take responsibilities for it, not children. To this end, she mentioned that media played a crucial role in raising awareness to organise a behavioural change and a paradigm shift.

At the end of the conference, the participants pledged to report child labour issues based on evidence, ethical and quality reporting. =DNA