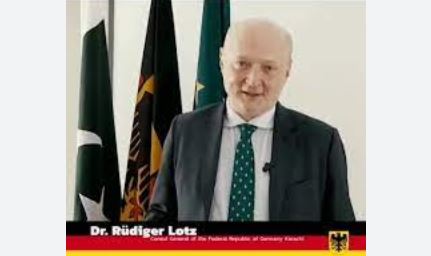 KARACHI, DEC 04 (DNA) – Amid a countrywide celebration of Sindh Culture Day on Sunday, the German Consul General in Karachi Dr Rüdiger Lotz put on beautiful Sindhi attire to celebrate the rich and profound heritage of the Sindhi people.

He further said that Sindh is a land of peace, love, respect and brotherhood as it has a great culture. Dr. Rüdiger Lutz wore a Sindhi cap with the colors of the German flag along with a Sindhi cap of different colors and gave a message of long live Sindhi culture and pure German friendship.

German Consul General Dr. Rüdiger Lutz said that Sindh is the land of Sufis, played an important role in establishing peace here.  He further said that children, old people, youth and women are showing their love for their culture.

It should be noted that Sindhi Culture Day is celebrated worldwide on the first Sunday of December goes and the participants wear Sindhi cap and Ajrak to highlight the Sindhi culture.

People express their love for their culture by performing Sindhi cultural tableaus in various events or dancing to regional songs.

On this occasion, various cultural, government, and non-government organizations organized seminars, rallies and conferences to highlight the centuries-old culture of Sindh valley.

A large number of people including political workers, leaders, NGOs, students, laborers, villagers, associations, and workers purchased the traditional Topi and Ajrak to mark the day.

Sindh Chief Minister Syed Murad Ali Shah in his message on the occasion of Sindh Culture Day said this day gives us the lesson to respect all traditions and customs without any discrimination. =DNA