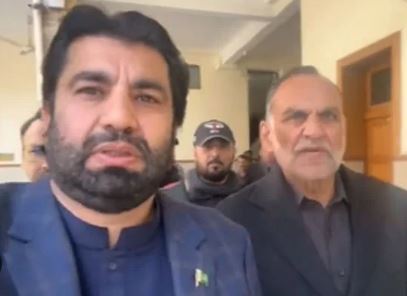 QUETTA: A Quetta court on Sunday handed over Pakistan Tehreek-e-Insaf (PTI) Senator Azam Khan Swati to police for a five-day physical remand in the case registered against him for tweeting against senior military officers.

The PTI leader is facing charges of libel for using foul language against military officers in his tweets. Initially the senator was arrested by the Federal Investigation Authority (FIA).

But on December 2, Balochistan police arrested Swati for a similar case registered against him in Quetta.

At the time of his arrest, he was already on judicial remand in Adiala Jail, following his detention for a second time in a controversial tweets case on November 27. He was then shifted to Quetta under a transit remand acquired by the Balochistan police

The police had requested a 10-day physical remand but the court only approved it for five days.

Speaking to the media after the hearing, Suri condemned the police action against the “elderly leader in extremely cold weather”.

“Is Azam Swati a foreign spy? What has he done. I think it is not good to use Balochistan in such activities,” he said.

Suri further claimed that there is “no worse example” for the restriction on freedom of expression than this.

He said that only the case for attack on PTI Chairman Imran Khan is not being registered, but the rest of party leadership is facing cases.