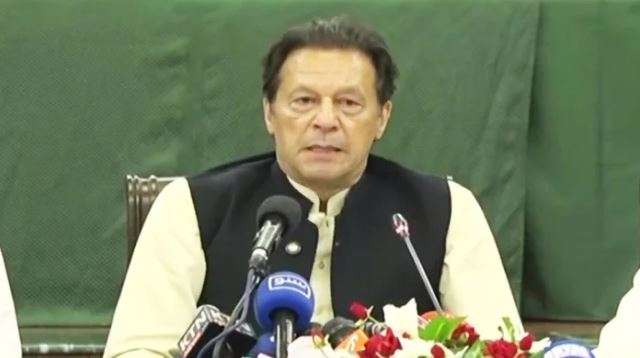 LAHORE: PTI  Chairman Imran Khan on Tuesday announced the date for his party’s much-awaited long march and said that it will start on Friday, October 28.

The announcement came while Khan was holding a press conference at the Chief Minister’s House in Lahore, during which he said that the march will start from Lahore’s Liberty Chowk at 11am.

The former prime minister termed PTI’s long march “far above” politics and said that the move was “jihad as it was now a decisive moment for the people of Pakistan to choose their sides.

“This march will decide whether the people want to do slavery of these “thieves” or not. There is our march for Haqeeqi Azaadi and it has no timeframe. We will reach Islamabad from the GT Road and the nation will come from across Pakistan to Islamabad,” he maintained.

Shedding light on the way the government issued warnings to the PTI in relation to the long march, Khan said that when he was the premier, JUI-F chief Maulana Fazlur Rehman, PML-N’s Maryam Nawaz, and PPP’s Bilawal Bhutto-Zardari held two long marches.

“At that time, they disregarded the economic situation of the country,” he said.

The government approached the Supreme Court earlier to stop the PTI’s long march. However, the apex court rejected the request to issue an interim order for stopping the PTI’s planned long march — giving a boost to the Khan-led party.

Before it approached the top court, the government issued repeated warnings to the PTI chief, with a top official saying that the authorities would multiply their May 25 policy by 10 if Khan announces another long march.

Khan, during the presser, added that he was supposed to start the long march much earlier but the government created hindrances for the party.

“On May 25, our peaceful marchers were attacked and we had to call it off just for the sake of the country. Horse trading took place in Sindh House and our government was forcefully toppled. And when I won the July by-elections, I was bombarded with court cases,” the PTI chief lamented.

He added that so far, the coalition government had registered 24 first information reports (FIRs) against Khan.