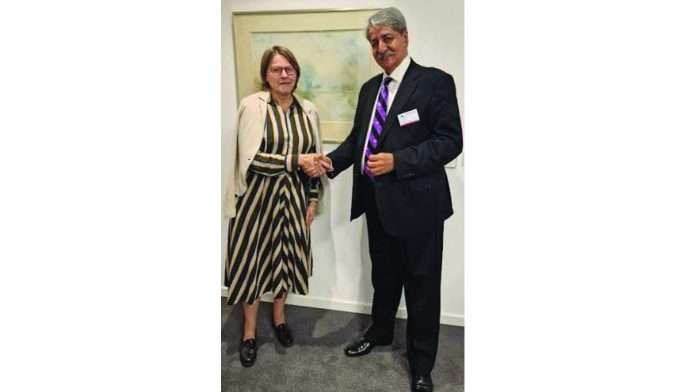 Brussels, OCT 25 /DNA/ – The Federal Minister for Commerce and Investment, Syed Naveed Qamar, who is on an official visit to Brussels met the Vice President of the European Parliament MEP Heidi Hautala, in Brussels today.

The Ambassador of Pakistan to Belgium, Luxembourg and the European Union, Dr. Asad Majeed Khan and other officials were also present during the interaction.

The Minister briefed Vice President Hautala about the climate-induced catastrophe in Pakistan which has caused unprecedented loss of lives and destruction to infrastructure. Minister Qamar highlighted that the floods have inundated one third of country, affecting 33 million people and killing 1,725 people including 643 children. He added that the catastrophe has caused an economic loss of over US$ 40 billion and has pushed the country’s development agenda back by years.

Minister Qamar emphasized that Pakistan is at ground zero of the climate crisis, despite contributing less than 1 percent of global greenhouse gases. He elaborated that the country has been suffering extreme weather events and has suffered from droughts, forest fires, severe and prolonged heat waves as well as unprecedented and prolonged monsoon rains, which resulted in catastrophic floods.

The Minister also expressed gratitude on the overwhelming expressions of solidarity and support by the EU and its member states in the aftermath of the destruction caused by the climate-induced disaster in Pakistan.

In his interaction with the European Commissioner for Crisis Management Mr. Janez Lenarcic, the Commerce Minister thanked him for his visit to the flood affected areas in Pakistan, earlier this month.

The Minister also conveyed appreciation for the EU and its member states for collectively providing the largest humanitarian assistance of Euro 133 million as well as for activating the Civil Protection Mechanism and provision of Copernicus emergency satellite service following the devastating floods in Pakistan.

Later in the day, the Minister held separate meetings with several key Members of the European Parliament (MEPs), including MEP Tomas Zdechovsky, MEP Fabio Massimo Castaldo and MEP Helmut Scholz. During the meetings, he exchanged views with the Parliamentarians on a broad range of issues, including Pakistan- EU trade and investment relations.

The Members of the European Parliament thanked the Commerce Minister for his briefing on Pakistan’s relations with the EU and agreed to enhance parliamentary exchanges with Pakistan.