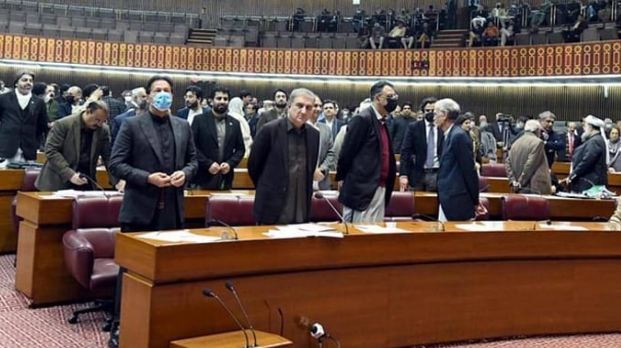 ISLAMABAD, DEC 25: Pakistan Tehreek-e-Insaf (PTI) Chairman Imran Khan, on Sunday, summoned all his party’s MNAs to the Khyber Pakhtunkhwa (KP) House in Islamabad on December 28 to chalk out a strategy of their resignations.

PTI Senior Vice President Fawad Chaudhry, confirmed that the party chairman had summoned the session, adding that Imran Khan would address the MNAs via a video link from Zaman Park Lahore.

Sources told that the former premier and MNAs would discuss their strategy regarding their resignations from the assembly.

PTI had announced to reach out to NA Speaker Raja Parvez Ashraf and verify their resignations on December 22; however, they postponed the move after Governor Punjab’s denotification of Chief Minister Punjab.

On Thursday, the National Assembly Secretariat notified that the speaker would again summon the party’s MNAs into his chamber one by one.

PTI’s members of the National Assembly will be called in for verification of their resignations in pursuance of “Paragraph (b) of Sub-Rule (2) of Rule 43 of the Rules of Procedure and Conduct of Business in NA, 2007”.

According to an official statement, the NA secretariat also responded to PTI Vice-Chairman Shah Mahmood Qureshi’s letter, which he wrote on December 15. The NA speaker received a letter from Qureshi for an appointment to submit PTI’s request to accept all resignations. It would be responded to the due course after careful consideration.

The speaker said that PTI lawmakers conveyed to him not to accept their resignations.

Earlier in June, the speaker invited the Imran Khan-led party’s MNAs to verify their resignations, but no one turned up.

The development came several weeks after the party’s lawmakers tendered their resignations en masse after Imran Khan’s government was ousted through a no-confidence motion in April.