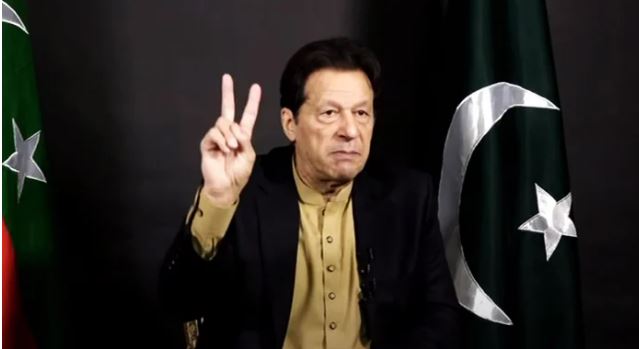 After holding back-to-back consultations with his party’s leadership, Pakistan Tehreek-e-Insaf (PTI) Chairman Imran Khan said Wednesday he would announce the dissolution of both assemblies — Punjab and Khyber Pakhtunkhwa — on December 17.

In his address to the nation via video link, the former prime minister said he would announce the date for the assemblies’ dissolution during the party’s public gathering at Lahore’s iconic Liberty Chowk.

Khan’s address came after he consulted the party’s senior leadership today on important political and economic matters that “required his party to take action”.

“Once we dissolve both the assemblies, we will hold elections in the provinces. Also, our 123-125 National Assembly members — whose resignations have not been accepted — will ask the speaker inside the assembly to accept their resignations.”

Following these moves, Khan said as much as 70% of Pakistan would move towards elections and in line with the law, elections should take place within 90 days of the assemblies’ dissolution.

“But unfortunately, our leaders are corrupt and convicts. They do not care about what happens to Pakistan and when bad times take over the country, they will exit the country,” he said.

Khan said the coalition rulers were worried that if they step down then another government would be formed and their corruption cases would be reopened.

“I have never seen cases of big dacoits being closed in my 70 years of experience. I am sure that even banana republics don’t do such things,” the ex-premier said.

The PTI chief said no country can progress without rule of law and justice as he claimed that Pakistan was on the “brink of destruction” as there was “no rule of law”.

“Why are we here? Because the poor people are in jail as powerful people are receiving NROs, getting their cases closed, and coming back to the country,” the ex-prime minister said.

Khan said documentaries have been shot and books written on the corruption of two families that belong to the Pakistan Muslim League-Nawaz (PML-N) and Pakistan People’s Party (PPP).

“It is so saddening that Suleman Shehbaz came back to Pakistan and addressed a press conference claiming that he was a victim,” Khan said as he asked Prime Minister Shehbaz Sharif’s son the reason behind the death of the people involved in the case.

“How did all the witnesses die of heart attacks in his money laundering case? Someone should investigate this case. Also, Ishaq Dar has also been given a clean chit […] when he was asked for the receipts of his income, he flew abroad on the prime minister’s plane.”

The PTI chief said even the people belonging to the “Zardari mafia” will be forgiven, including his sister Faryal Talpur. “The powerful can only survive here.”

The cricketer-turned-politician said that anybody who understands the economy knows that the first rule is to ensure there is political stability as “markets can’t perform under uncertain situations”.

“Investors and businessmen are reluctant to invest their money as the risk of default has grown to 100% as compared to 5% which was left behind by PTI,” he added.

“Because of this reluctance salaried people are struggling to make ends meet as electricity prices are currently sky-high,” he said blaming the coalition government for increasing the price of gold to 224.80 per litre which was around Rs150 per litre when PTI was ousted in April.