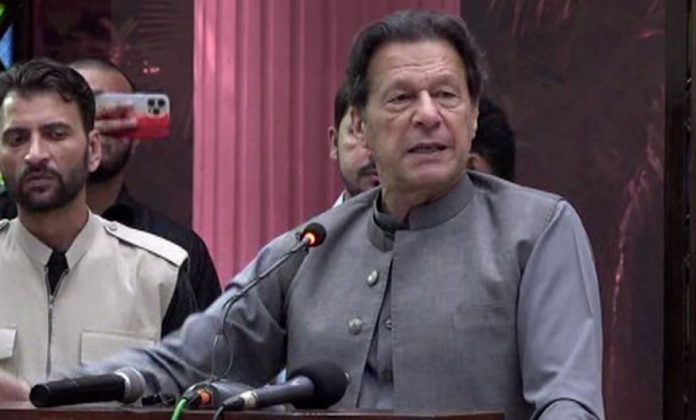 ISLAMABAD, JUN 1 /DNA/ – PTI Chairman and former prime minister Imran Khan said on Wednesday that the party had filed a petition in the Supreme Court seeking its protection, and he would announce the date for the next march to Islamabad as soon as the apex court rules on the matter.

Addressing a social media conference in Peshawar, Imran said he wanted the Supreme Court to grant protection to the PTI’s march and answer whether Pakistanis have the fundamental right to hold a peaceful protest.

He highlighted the way the federal and Punjab governments had responded to the PTI’s recent Azadi March on May 25 by “firing [tear gas] shells and wrongfully using Punjab police” and said this was why the party wanted a ruling from the SC.

“As soon as their decision comes, I will announce [the date for the next march] and we will leave [for the capital].” The PTI chairman said the party’s planning would be better this time. “After [the previous] Supreme Court ruling, we believed the path would be clear and no one would be picked up. We will not repeat the mistakes.”

PTI’s Azadi March on May 25 was preceded by the authorities invoking Section 144 — a measure used to curb gatherings. Shipping containers were put in place on major thoroughfares to block their path.

Undeterred by the moves, the marchers tried to force through the containers to make their way to Islamabad amid intense shelling and baton-charge by the police. PTI supporters were also arrested in cities across Punjab.

The PTI’s march towards Islamabad’s D-Chowk and the shelling of teargas by police took place despite the Supreme Court directives for the former to hold its protest in Islamabad’s H-9 area and orders for the government to not make arrests or use force in connection with the march.

However, Imran had chosen to turn back from the 9th Avenue after giving a six-day deadline to the government for announcing elections and dissolving assemblies and warned that he would return to the capital with the “entire nation” otherwise.

In his speech today, Imran exhorted party workers to continue their struggle against “criminals”, telling them that what they were doing was “jihad, and not politics”.

“The violent, barbaric way in which shelling was done … law enforcement agencies do not do this violence on their own people. Only criminals do this.”

Pakistan’s biggest problem was injustice, he said, adding that citizens would have to get their right through jihad.

“This is the most important time for the nation. If we defeat them (the incumbent government), Pakistan will progress. And if we do not, then your children will have to fight this war.”

The PML-N-led coalition government was “threatening people and scaring them”, he alleged and claimed that according to evidence collected by the PTI, the shells fired at party supporters were “the ones used only against terrorists”.

The PTI chief called on his supporters to defeat the fear, saying, “I do not fear anything because I believe we are fighting this war for our [future] generations.”

He claimed that Prime Minister Shehbaz Sharif and Interior Minister Rana Sanaullah were “criminals” and “the most cowardly people”.