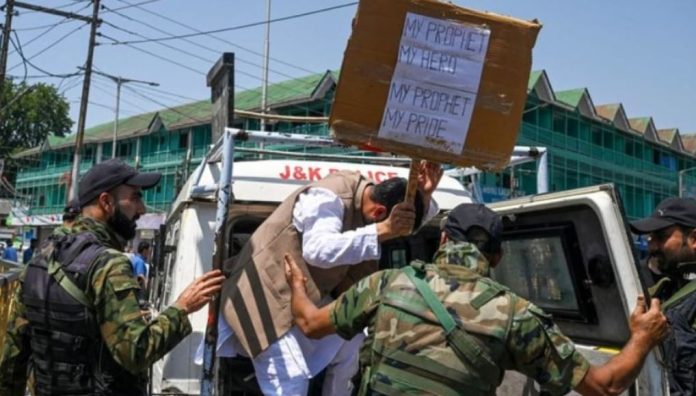 NEW DELHI, JUN 12: Indian police cracked down on protests on Sunday that erupted across the country over derogatory remarks against Holy Prophet Muhammad (P.B.U.H) by members of the ruling Bharatiya Janata Party (BJP).

Muslims have taken to the streets to protest against anti-Islamic comments made by two members of Prime Minister Narendra Modi’s Hindu nationalist Bharatiya Janata Party (BJP) in the recent week.

Earlier this month, the BJP suspended its spokeswoman Nupur Sharma and expelled another leader, Naveen Kumar Jindal, for their controversial comments about the Prophet (P.B.U.H) that also angered several Muslim countries, causing a massive diplomatic challenge for the Modi government.

Police cases have been filed against the two former BJP officials.

Countries such as Qatar, Saudi Arabia, the UAE, Oman, and Iran, which are key trade partners for India, lodged protests through diplomatic channels and used social media to demand an apology from the government.

India’s foreign ministry said last week that the tweets and comments do not reflect the views of the government.

Clashes over the remarks simmered across the country, as some in the minority Muslim community see them as the latest instance of pressure and humiliation under BJP rule on issues ranging from freedom of worship to the wearing of hijab head scarves.

Two teenagers were killed when police opened fire on protesters in the eastern city of Ranchi last week.

Sporadic riots in northern Uttar Pradesh state led to the arrests of over 300 people.

In the eastern state of West Bengal, authorities enforced an emergency law prohibiting public gatherings in the industrial district of Howrah until June 16. At least 70 people were arrested on charges of rioting and disturbing public order, with Internet services suspended for over 48 hours after the latest communal violence.

In occupied Kashmir, police arrested a youth for posting a video against Nupur Sharma, a former spokesperson of India’s ruling party who had made derogatory remarks about the Prophet (P.B.U.H), officials said on Sunday.

The video, circulated on YouTube, has been withdrawn by authorities as part of a wider attempt to curb religious unrest that has spread across the country.

BJP leaders have issued instructions to several senior members to be “extremely cautious” when talking about religion on public platforms and the government continues to tighten public security. The report also said police raided the home of student leader Afreen Fatima, arresting her father Mohammad Javed, mother and sister. They have accused her father, who is diabetic and needs insulin daily , of “masterminding the protests”.

“First a police party came at around 8:30pm and took away my father and then they came at 11:30pm and detained my mother and sister. Third time they came at 2:30am to detain me but we resisted and since then the policemen have cordoned off our house,” Fatima told.

“We are only women and children at home. We feel cornered and traumatised. The police have asked us to leave the house locked.

“I have no idea where my father, mother and sister are. I am worried about their safety. My father is a diabetic and he needs insulin injection every night.”

Meanwhile, Pakistan on Saturday strongly condemned the “heavy-handed treatment by the Indian authorities of Muslim who were registering a peaceful protest after Friday prayers”.

In a statement issued on June 11, the Ministry of Foreign Affairs noted that the “indiscriminate and widespread” use of brute force by the Indian authorities across various states in India had resulted in killing of two innocent Muslim protesters and critically injured thirteen others in Ranchi city.

“The footage of Indian forces unabashedly opening fire on unarmed protesters in Ranchi city is horrific beyond belief. This is a new low in the Indian government’s repressive ‘Hindutva’ inspired majoritarian policy aimed at demonizing and persecuting minorities, especially Muslims,” it said.

“Pakistan denounces this shameful treatment of Indian Muslim citizens by the Indian government and expresses its solidarity with the Muslims of India in these testing times.”

The ministry called the situation in the neighbouring country alarming, continuing that despite the global condemnation of the BJP officials’ sacrilegious remarks, the Indian government’s reaction had been muted, while on the other hand the BJP-RSS regime had persisted in its Islamophobic actions and had shamefully chosen to handle public protest with brutal and indiscriminate use of force.

“The Indian Government’s apathy to the grievous situation and the vicious cycle of communal violence may lead to further marginalization of the Indian Muslims,” it warned, urging the international community to take immediate cognisance of the grievously aggravating situation of Islamophobia in India.

India must be held accountable for stifling the rights of the minorities, especially Muslims, and ensure that Muslims living in India are not victimized for practicing their faith and religious beliefs, the ministry added.