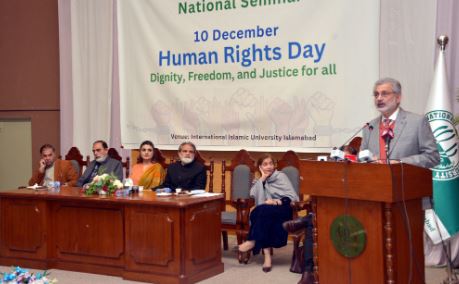 ISLAMABAD, Dec 10 (DNA): The Human Rights Day themed as Dignity, Freedom, and Justice for all was marked with a National Seminar at the female campus of the International Islamic University (IIUI) that was held in collaboration with Parliamentarians Commission for Human Rights (PCHR).

In his opening remarks, Muhammad Shafique Chaudhry, Executive Director Parliamentarians Commission for Human Rights said that the Universal Declaration of Human Rights remains as relevant today as it was on the day in 1948 that was proclaimed and adopted by the UN.

Qazi Faez Isa, Justice Supreme Court of Pakistan and the Chief Guest of this event, during his speech identified that human rights are recognized as the fundamental rights in the constitution of Pakistan. Despite the fact that Article 25 gives the right of education to both boys and girls, over 1000 attacks over educational institutions of Pakistan were committed in three years.

He opined that Islam is inclusive and non-discriminatory religion. He opined that Ignorant men dominate women, the Holy Quran says men are protectors of women. He said Islam is the best example of giving dignity, freedom and justice to the humanity, irrespective of their cast, creed, and color.

Dr. Syed Muhammad Anwar, Chief Justice Federal Shariat Court urged that the universal declaration of human rights is a comprehensive draft having 30 articles is recognized by the constitution of Pakistan as well. “We have to be objective, we have to discuss the shortcomings along with the achievements as a nation. The federal Shariat Court has declared that the Domestic Violence law does not have any clause contrary to the Islamic teachings.”

He said that domestic violence is an unethical, inhuman activity that should be ended in Pakistan. Nobody could restrain the female rights to access justice according to Islam. Human rights and Islam complement each other. He said In Islam the domestic violence is prohibited as it teaches that women should be treated with care and respect.

Senator Talha Mehmood, mentioned that safety of females should be ensured in the country. We see Muslims all around us but the Islam and its preaching should be adopted by all of us in its true sense. Islam is the religion of peace and prosperity which gives female freedom and dignity, they had participated in wars, bear the burden of economic activities as well.

Education is the most important source to bring change in a positive manner. The government is trying to cater the effectiveness of the institutions by giving them standard training for their capacity building to ensure public safety. The child protection is the aspect which needs government attention and it would be possible through strengthening the institutions. The women should be given due rights protected by the Islam as well as the constitution.

Ms. Kashmala Khan, Federal Ombudsman stated that people should have the awareness regarding their rights and laws given by the constitution of Pakistan. FOSPA is giving justice to the vulnerable people of society, especially females. The laws came in 2010 regarding workplace harassment and later on the law related to property rights was introduced. She further said that harassment is not acceptable in any segment of society.

FOSPA is determined to end discrimination between male and female by giving women the dignity and freedom as well as justice to the effected people. Females should not remain silent and speak up against the unjust behavior of society.

Gender equality cannot be possible without knowing the rights given by the constitution of Pakistan. Three institutions need to be reformed including police, academics, and judiciary. The challenge is to implement the property rights law and workplace harassment law in each province of Pakistan.

For the provision of legal aid LAJA has declared that every woman is entitled for the legal aid along with all the human beings. LAJA is giving free legal aid to all the citizens of society. For the capacity building, legal awareness LAJA is training the lawyers and the other legal institutions for the amicable dispute resolution.

Dr. Samina Malik, Vice President, Female Campus, IIUI, in her address on the occasion, briefed that students from forty different countries are acquiring quality education. He said that the university is on the path of development under the newly prepared strategic plan.

Dr. Farkhanda Zia, DG Shariah Academy, IIUI while delivering her speech mentioned that every human being should respect the other human being. International law, international declaration of human rights, and Islam all insists on dignity of human beings.

While commemorating the Human Rights Day the findings should be displayed depicting the status of human rights to understand where we stand in accomplishing the human rights declaration.

Dr. Samina, vice President, Female Campus, IIUI urged the academics to acquire comprehensive understanding regarding the basic rights of citizens so they could deliver that valuable knowledge to the new generation. At the end of the ceremony, shields were given to the dignitaries.