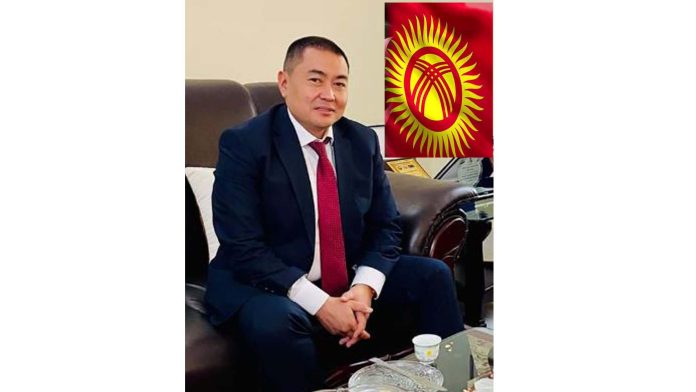 ISLAMABAD, Ambassador of the Republic of Kyrgyzstan to Pakistan Ulanbek Totuiaev on Sunday said that the bilateral Preferential Trade Agreement (PTA) between Pakistan and Kyrgyzstan would not only increase the trade volume between the two countries but also act as a catalyst for regional economic integration.

Talking to APP, Ulanbek Totuiaev said the implementation of the PTA would serve as a prolific accelerator for enhancement of trade between Pakistan and Kyrgyzstan. “In this regard, I consider it meaningful for both our governments and, especially, concerned authorities to point out specific areas of interest, in which bilateral trade can be the most efficient and mutually profitable.”

The ambassador said by completing this process, both sides will have all necessary information for designing, successful implementation, and further effective usage of the PTA.

Replying to a question, he said that since Kyrgyzstan and Pakistan had have highly developed agricultural sectors, there was a great potential for the development of cooperation in this sphere. “In particular, Kyrgyzstani agricultural companies can export dairy products, meat, dry fruits, honey, raw leather, and some cultivated crops such as beans to Pakistan,” he added.

Ulanbek Totuiaev said that businessmen from the Pakistani side can more actively cooperate with Kyrgyz companies in terms of exporting wheat, flour, citrus fruits, and sugar with further re-exporting it to the countries of Eurasian Economic Union.

He said the same operations could be done in spheres of industrial manufacturing, textile, construction materials and others.

Ambassador Totuiaev said that in particular, there were great opportunities with regard to exporting of pharmaceutical products from Pakistan to Kyrgyzstan.

“The effective trade between Kyrgyzstan and Pakistan is possible in various spheres. However, in order to effectively use the existing potential, businessmen and companies should pay more attention to the trade opportunities and more actively interact with partners from each side.”

Responding to another question, he said the bilateral trade between Kyrgyzstan and Pakistan had a huge potential, which was, however, not fully explored and utilized. “I call upon both sides to actively cooperate in order to overcome the problems which are influencing this issue,” he added.

The ambassador said that first of all, there was a lack of mutual awareness and as the representatives of business-circles of both side were not completely aware of the trade-economic and investment opportunities.

In order to deal with this issue, the Embassy of Kyrgyzstan in Islamabad,together with Pakistani partners is actively working on the organization of mutual business visits, various seminars and conferences, as well as on the permanent basis informing the businessmen from both sides on the existing great trade-economic and investment opportunities, he said.