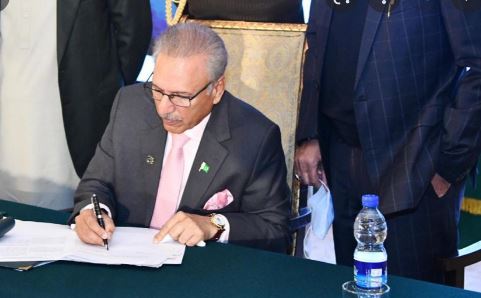 Islamabad, JUN 19: President Arif Alvi has said that he has been pursuing the issue of Electronic Voting Machines and Overseas Pakistanis Voting with all governments, in the parliament, as well as with the Supreme Court of Pakistan since more than a decade.  He has not signed the bill despite the fact, that the constitution that he upholds, will make it into law.

While expressing himself the President said that It has been very painful to him personally as President of Pakistan, to not sign a bill passed by Majlis Shoora. Therefore he must record his reasons for posterity.

While enlisting the reasons, the President said that besides the proposed laws’ regressive nature that he pointed out in detail when he referred the bill back to Parliament, he strongly believes that technology today, specially with EVMs when used judiciously contains many solutions that reduce the impact of confusion, discord and accusations in our ‘ever-marred’ and challenged election processes. Technology can also improve transparency, make elections inclusive with the vote of our Overseas Pakistanis, build confidence and reduce polarization to finally achieve our elusive dream of free and fair elections, he added.

More than that, he wants Pakistan to leapfrog into the world of tomorrow, not to solve today’s problems only through the lens and experiences of yesterday but through newer and better scientific approaches that are available, or even ‘birthing’ today. He does understand that this cannot happen without confidence building measures across the aisles, and broad stakeholder involvement. Why was this not done and why the obvious was not visible to the opinion and decision makers will remain an enigma to him, he added.

The President observed that the present and future governments and parliaments will be facing two choices, whether to allow the past to drag Pakistan down or allow the lessons from the past and technologies of today to boost us into the bright progressive and dynamic future of Pakistan that has been our dream.

He further observed that many such decisions will continue to challenge us, and history shows that those who make the right decisions ‘rise’, and those who don’t, squander opportunities that obstruct their path to glory.