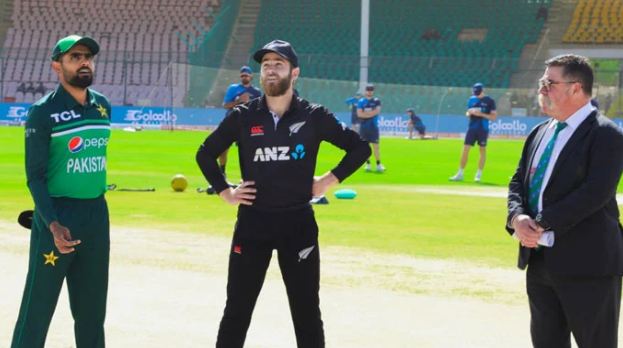 Karachi, JAN 13: Babar Azam opted to bat first against New Zealand after winning the toss in the third and final one-day international (ODI) at the National Bank Cricket Arena in Karachi.

The series is levelled at 1-1 after the first two matches.

Pakistan have made two changes to the playing XI. Shan Masood has been replaces Imam-ul-Haq, while Mohammad Hasnain replaces Naseem Shah.

New Zealand have made no changes in their playing XI.

The left-hander scored 101 and captain Kane Williamson made 85 before a collapse which saw New Zealand lose nine wickets for 78 runs and restricted them to 261 all out in 49.5 overs.

Pakistan lost wickets at regular intervals and despite a fighting 79 from skipper Babar Azam, the home team were dismissed for 182 to leave the three-match series tied at 1-1.

Earlier, Pakistan strolled to a six-wicket victory over New Zealand in the first ODI on Monday after fast bowler Naseem took five wickets in Karachi.

The 19-year-old grabbed 5-57 for his second five-wicket haul in just four ODI appearances as New Zealand, sent in to bat, managed 255-9 in their 50 overs at the National Stadium.

Mohammad Rizwan (77 not out), skipper Babar Azam (66) and Fakhar Zaman (56) then helped Pakistan cruise to victory with 11 balls to spare.