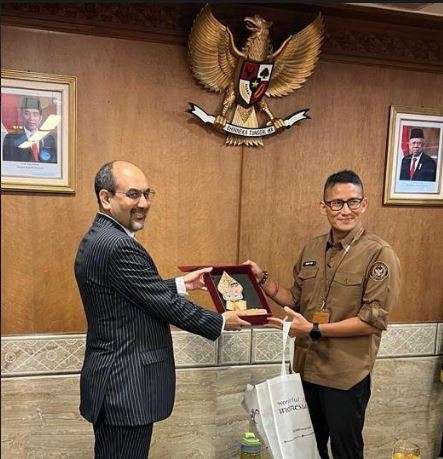 During the meeting, the Ambassador briefed the Minister about bilateral relations in diverse fields, including political, economic, trade, defense and culture and the desire of the government to further expand the bilateral cooperation in all these areas. He gave a detailed presentation on Pakistan’s tourism potential including, adventure tourism, halal tourism, cultural tourism, and religious tourism etc.The Ambassador also stressed on the need for starting direct flights between Pakistan and Indonesia, easing the visa requirements for Pakistani nationals, and proposed granting them visa on arrival.

Minister Salahuddin acknowledged the historical and brotherly relations between Pakistan and Indonesia and the tremendous scope for cooperation in tourism sector between both the countries. He expressed his keen desire to expand this cooperation.

He mentioned that Indonesia had six (6) polytechnic institutes of tourism which could train Pakistani tour operators in Indonesia. He also proposed to cooperate in other sectors of creative economy including culinary, fashion, arts, handicrafts, etc.

Regarding visa on arrival facility for Pakistan nationals, the Indonesian Minister assured that they would give this proposal positive consideration. He also promised to look into the cumbersome visa process and in consultation with other stakeholders would try to make it easier and more friendly. Both sides also agreed to expedite signing MoU in tourism sector.