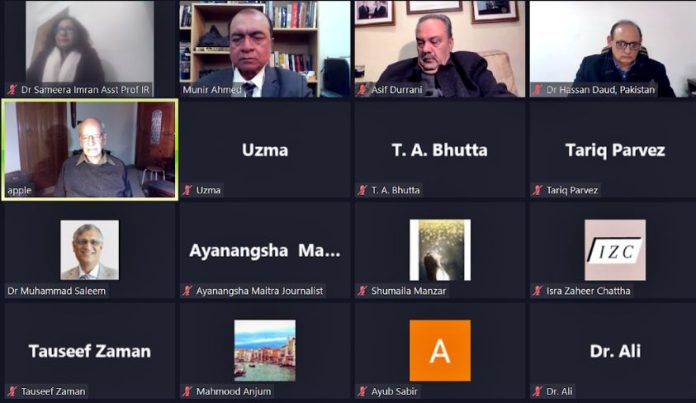 ISLAMABAD, JAN 7 /DNA/ – Speakers at a webinar urged for internal political stability and people-centric national security paradigm to meet the geopolitical and geo-economic challenges confronting the country. The vested interest of the key individuals runs the internal and foreign policy framework that is actually based on the short-term measures. A long term integrated and comprehensive national security framework is yet to come out.

The speakers mentioned that the Establishment could not be A-political. It has to watch the state direction and national interests in the context of changing geopolitical landscape. However, the Establishment shall have no political fiddling and interference. The political experimentation has led us to chaos and internal instability, denting the geo-economic interests.

The keynote speaker Lt General retd Muhammad Asad Durrani said the National Security (NS) is a comprehensive concept. Its three pillars – internal, external and defence are linked to each other. The domestic front is the most important while other two are essentially its projection. A stable structure is built on firm foundations. In terms of NS, it implies strengthening the Civil Society. The “people centric” policies are therefore the mantra we often recite. Devolution or Local Governments are the doctrine and instrument to implement the policy objectives.  “Subsidiarity” is the basic principle of Public Administration, which means that what can be done at a lower level, must not be undertaken at a higher level.

He said because of the weakness of our state structures, it’s the private sector that meets most of our needs, especially for the masses. Gaps in health and education for example are filled by the NGOs or through the individual enterprise. The best illustration of the role of our “Non-State Actors” is in the economic field. Undocumented, Underground, or whatever it may be described; this sector is now probably larger than the official economy. By keeping themselves out of the extractive state’s stranglehold, it provides poor employment and affordable livelihood.  They may even be helping the country to stay afloat despite the near collapse of our official economy.

Ambassador Retd Asif Durrani urged to take steps to come out of the ‘security state’ paradigm and focus more on the non-traditional security threats including and food and climate security. A long term consistent plan shall be focus of all stakeholders in the government and state institutions, supported by efficient geopolitical diplomacy.

Dr. Hassan Daud Butt stated that the crisis creates new opportunities and after COVID-19 and the existing financial crises, we have an opportunity for introspection and also to establish a better pattern of development. In these challenging times, governments have a vital role to play in identifying low-hanging fruits in sustainable development. We must prioritize government investments toward a people-led paradigm rather than a security paradigm. Infrastructure projects shall be the priority to create rural-urban synergy where the agriculture sector is a major contributor to national GDP.

Dr. Sumeera Imran said: Political instability, polarization and uncertainty are the greatest threats to Pakistan’s stability. Political stability is the third important pillar of state power, military and economic being others. In terms of parity and significance, political stability stands at par with military strength and economic security. Revival of the nation’s confidence in the sanctity of the political system and administrative structure takes the first priority in any security resolution.