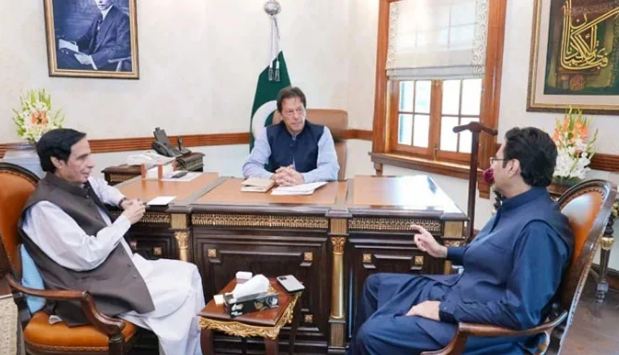 LAHORE: In a fresh development, Punjab Chief Minister Parvez Elahi has hinted at the possibility of a merger between the Pakistan Muslim League-Quaid (PML-Q) and its ally the Pakistan Tekreek-e-Insaf (PTI).

Elahi — while answering a journalist’s question during a media talk at the inauguration ceremony of the Khatam Ul Nabiyeen University in Lahore Sunday — implied that the possibility of the PTI-PML-Q merger might be a possibility.

On the question of whether the provincial chief executive would contest in the upcoming general elections on the symbol of a bat (the election symbol of PTI) or on the symbol of a tractor (PML-Q’s poll symbol), Elahi said: “You will have to be a little patient to hear the answer to this question”.

The proposal for the merger of the two parties was shared with journalists by Imran Khan in a meeting at his Zaman Town residence in Lahore Friday, where he looked quite relaxed and confident after Parvez Elahi’s successful vote of confidence.

Speaking to the media on Sunday, Elahi also said that Prime Minister Shehbaz Sharif would have to “fight for his life” to get the vote of confidence.

On the matter of the dissolution of the Punjab Assembly, Elahi told reporters that the governor of Punjab had to write a letter to Hamza Shahbaz, who is the Leader of the Opposition in the now-dissolved assembly.

“I don’t know if Hamza has returned to Pakistan yet or not, but he will meet Imran Khan tonight.”

Both Imran and Hamza are to suggest three potential names each as caretakers to the outgoing chief minister today.

Elahi, commenting on the recent trust vote he took in the provincial assembly said that the governor belonged to the PML-N and had instructed Elahi to take the vote of confidence.

It must be noted that against the backdrop of the recent political developments in the country, Khan, during an interview on a private television channel, said: “The PTI has passed the test. Now, Shehbaz Sharif will be fully tested.”

Referring to the vote of confidence taken by Elahi, Khan said: “Our numbers had been completed. Moonis Elahi worked hard at the last moment to achieve the required numbers of the PML-Q.”

The outgoing chief minister during his media address further added, “There will be such a split in the Pakistan Democratic Movement (PDM) that it will not be able to maintain its position and collapse.”