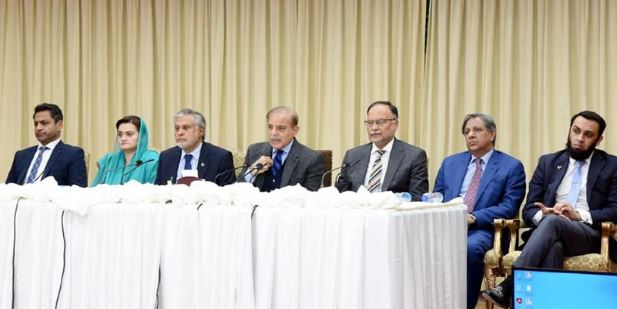 PM Shehbaz received a much-awaited apology and withdrawal of each and every allegation of corruption from publishers of the Mail newspapers last week over an article by reporter David Rose that had accused him and his son-in-law Imran Ali Yousaf of stealing British taxpayers’ money.

The British publication also removed the article — “Did the family of Pakistani politician who has become the poster boy for British overseas aid STEAL funds meant for earthquake victims, asks David Rose” — written by David Rose from all platforms of Mail publishers.

The United Kingdom-based publication has failed to prove the allegations levelled by its journalist David Rose in an article against the premier about the alleged misappropriation of public funds.

The Daily Mail took down its article on Thursday within minutes after informing the court that it had decided not to go for the trial and decided to settle the case with PM Shehbaz and Yousaf.

In a press conference today alongside federal cabinet members, the prime minister said: “They thought that if this damaged Pakistan’s reputation, it won’t matter. They wanted to embarrass the Sharif family no matter what.”

PM Shehbaz said from 2008-2018, the United Kingdom’s DFID provided 600 million pounds to Pakistan for flood affectees — and most of that amount was given to Punjab.

“That amount was spent in a transparent manner. They aimed to prove that Shehbaz’s children laundered millions of rupees abroad. This is a part of the article.”

In the same article, it is written that Shahzad Akbar — ex-PM Khan’s aide on accountability — had arranged tours for Daily Mail journalist Rose, where he showed them the condition of convicts residing in jails, PM Shehbaz said.

The prime minister said when the article was published in 2019, PTI’s ministers were upbeat about the publication of the article and started levelling baseless allegations against the Sharif family.

“And despite it being a Sunday, DFID issued a clarification that nothing of the sort happened. It is my knowledge that DFID’s clarification was delayed by six hours on Imran’s directions. They wanted to slander me first.”

Fast forward, he said, as a result of the article, Pakistan was defamed, and a message was sent to the global community that they should not send donations to the country.

Then-home secretary Priti Patel’s version was also included in the Mail’s article that called for an investigation into the matter, he said, adding that following this, he announced going to a UK court against this.

“Fast forward three years, they were granted several adjournments, and I received an unconditional apology from the Daily Mail,” the prime minister said.

“This isn’t just an apology to me, this is an apology to the 220 million people and the mothers and daughters who were affected in the floods,” the premier noted.

On the contrary, PM Shehbaz said Imran sold the one-of-a-kind watch that Saudi Crown Prince Muhammad Bin Salman had gifted him when he was the prime minister.

“This was a cheap move that Imran made by selling a watch that contained the image of Holy Kaaba,” the prime minister said, adding that nobody can deny that the watch was not sold after the evidence that has come to the fore.

“I do not use the word ‘fraud’, but this is what Imran did. The shop owner — whose receipts that PTI showed relating to the watch — has also clarified that it is not his handwriting on the receipt,” PM Shehbaz said.

The prime minister called for “introspection” to understand how did such a person rule Pakistan, who did not only commit “fraud”, but hurt Pakistan on two important fronts — foreign policy and economy.

The prime minister also noted that Daily Mail published an apology to him in one million printed copies last Sunday. “This is Daily Mail’s timeline. This was a huge conspiracy against Pakistan, but it was Allah’s mercy that it was proven wrong.”

Panama Papers case was lodged against Nawaz Sharif but he was handed down punishment in iqama, the prime minister added.

The prime minister claimed that the PML-N supremo’s name was not mentioned in the Panama Papers case hence the iqama issue was added to the case.

“Imran Niazi and his aides provided thousands of documents to the UK’s National Crime Agency but after two years of investigations acquitted him in the case.

During the last days of his tenure, the former prime minister laid landmines for the upcoming government by not passing on the burden of petroleum prices to the consumers, the PM added.

To a question about the former army chief, the prime minister said that since General (retired) Qamar Javed Bajwa has hung up his boots, he should be allowed to live in peace.

For his part, Minister for Finance and Revenue Senator Ishaq Dar said some elements were peddling a false narrative that Pakistan was about to default or might have already reached that point.

Providing the data when the PML-N handed over the government to PTI, Dar said inflation was between 4.6%-4.8%, the food inflation stood at 2%, GDP growth was 6.1%, the stock market was among the best-performing markets in the world, and the policy rate was at 6.5%.

“These were among the core things that he received. Rs25,000 billion was the overall loan that they were handed over from the previous government — but they claimed that it stood at Rs30,000 billion.”

Dar said the PTI government would tell investors and friendly countries that it was in a “debt trap” and that the previous governments were “corrupt”.

The senator said while telling the global community that Pakistan was in a “debt trap”, the PTI government expected international investors to invest their money in the country. “Who would do that?”

The senator said during the PTI government, inflation skyrocketed, the rupee fell massively against the dollar, increased the loans drastically to Rs44,500 billion or an increase of 75%.

“Their government was confused. They did not have a revenue plan […] and they also pushed the country to the brink of default,” the finance minister said, claiming that PTI preferred politics over the state.

Dar said PTI installed “land mines” in terms of economy as they did not meet the commitments made with the International Monetary Fund (IMF). “This devastated the economy.”

But despite PTI’s bad policies, Dar said the incumbent government was quick to take move the Fund and take unpopular decisions for the economy’s revival.

“Pakistan will not default. The prime minister has taken bold decisions so there is no reason as to why Pakistan will default,” the finance minister added.