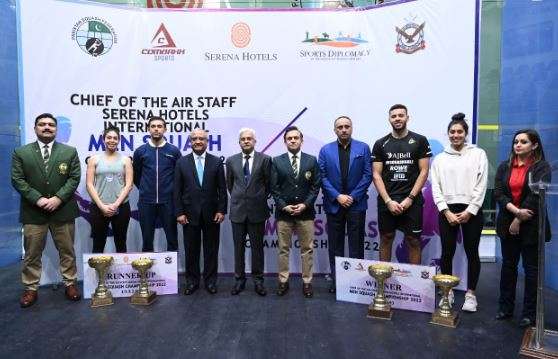 ISLAMABAD, OCT 23 /DNA/ – Pakistan squash took-off with the Chief of the Air Staff-Serena Hotels for Men and Women getting underway with the finale match being held on October 23rd between Egyptian Players, who battled it out on the court.

Pakistan Squash Federation has been putting tremendous efforts for revival of international squash in the country.

PSF in collaboration with Serena Hotels, has arranged the Chief of Air Staff International Squash Championship for Men & Women 2022 in Islamabad Sports Complex.

The Ladies were presented their winnings by The Chief Guest Mrs. Viqar Boolani and Wife of Air Marshal Mrs. Amir Masood, while the men’s final hosted Vice Chief of Air Staff Air Marshal Mr. Mohammad Zahid Mahmood as the Chief Guest along with Mr. Aziz Boolani, CEO of Serena Hotels.

The tournament was played from 19-23 October 2022 with Egypt ruling the semi finales with all entries being of the Egyptian Players, the Men’s Final was won by Mostafafa El Sirty (World Ranking 27), who played a smashing success against fellow countryman, Mohamad Al Sherbini (world ranking 28) who was the runner up.

“Serena Hotels has joined hands with the PSF and PAF for the national cause of promoting squash in the country. We heartily appreciate the sports diplomacy initiative as shared by Serena Hotels as their integral part to build stronger relations with the communities. Pakistan has a tradition of excellence in many sports, but competitive sports require the support of organizations through sponsorships and promotions.” Mr. Aziz Boolani said the CEO of Serena Hotels to the press while discussing the future of Squash in Pakistan.