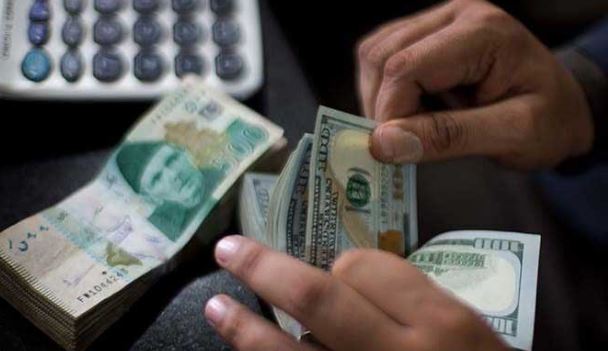 KARACHI: The Pakistani rupee continued to fall for the 14th consecutive session on Wednesday and hit a record historic low against the US dollar, with analysts expecting further depreciation of the local unit.

The rupee has been one of the worst performing currencies in the emerging markets and has fallen by nearly 9% so far this month owing to wide-ranging factors.

In the interbank market, the rupee plunged to 239.65 after losing 0.74, according to the data from the State Bank of Pakistan (SBP), down in value from the previous session’s close of 238.91.

The heavy flooding and the lifting of a ban on imports have created pressure on the local unit, but the country is looking toward aid from friendly countries and multilateral and bilateral institutions to overcome the persisting economic crisis.

Floods have affected 33 million Pakistanis, inflicted billions of dollars in damage, and killed over 1,500 people — creating concern that Pakistan will not meet its debts.

Pakistan was able to resume the International Monetary Fund’s programme (IMF) and get a $3 billion rollover from Saudi Arabia, but the unprecedented floods have overshadowed everything else and led to a hit of at least $18 billion to the economy, which could go as high as $30 billion.

Samiullah Tariq, the head of research at Pak-Kuwait Investment Company, said: “[There’s] a greater demand than supply; floods have added to the import bill; aid hasn’t arrived in cash yet, but once it does, the liquidity position will ease.”

A weakening currency may worsen the price pressures after inflation surged to the highest in almost five decades. The nation is also grappling with the aftermath of a series of deadly floods and needs additional funds beyond the IMF’s $1.1 billion loan to avert a default.

The advent of floods and their negative effects on the country’s external account are to blame for the recent slide in the currency.

The loss of crops will now have to be made up for through imports and weak external flows, which have remained low since the signing of the IMF deal.

The $1.1 billion IMF loan tranche did help Pakistan improve sentiment, saving the country from default. However, additional inflows from the Middle East nations were anticipated to follow.

These inflows have not arrived yet, according to analysts.

In the past several months, investments and loans totalling $9 billion from Saudi Arabia, the United Arab Emirates, and Qatar have been promised to Pakistan.

While Saudi Arabia has already extended a $3 billion deposit that was due in December as part of that help for one year, the three countries have not yet distributed any new investments and have not provided a timeline for when they intend to do so.

The government is worried about a free fall of the rupee and is considering some steps to stabilise the foreign exchange market. Recently, the State Bank of Pakistan issued a show-cause notice to eight banks for selling dollars at prices higher than the current market rate, Finance Minister Miftah Ismail revealed over the weekend, to stop the rupee’s wild decline.

“The IMF loan was more to do with sentiment and was expected to be followed by inflows from other friendly countries,” said Sana Tawfik, economist at Arif Habib Ltd. in Karachi.

“These things were to materialise, but we don’t see any inflows yet.”