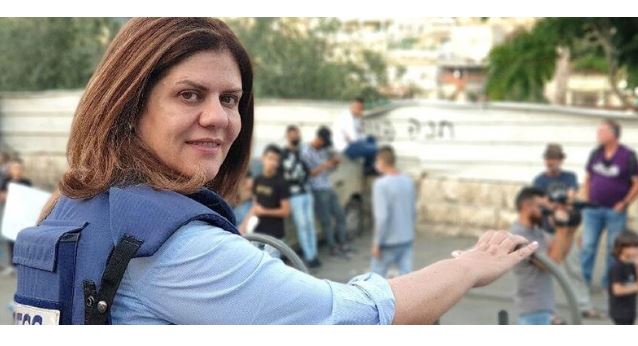 Ramallah, AUG 21: More than 100 days after Shireen Abu Akleh was murdered in Jenin, hundreds of Palestinians and supporters gathered in Ramallah to unveil a street named after the Palestinian veteran journalist.

The street is on the way that Abu Akleh used to travel daily to get to work at the Al-Jazeera network office in Ramallah and where she was reporting live coverage of incidents in Palestine.

Ramallah City Municipal Council announced the new street in the presence of Abu Akleh’s family and supporters, along with a monument where she stood during her reports.

The memorial reflects the symbolism of Abu Akleh in the collective memory of Palestinians since they still consider her as their voice. Ramallah Municipal spokeswoman Maram Totah said the street names are a way to honor those who made the ultimate sacrifice in the service of the Palestinian cause as city streets are always named after martyrs and fighters who carried their message in their lives and deaths.

“Shireen was an exceptional giver. She held the voice of the Palestinians and never stopped telling the world about the crimes committed by the occupation against the Palestinian human being,” said Totah.

“She had a special, special place in the hearts of the city’s people. She was attending the social activities with them and this memorization of her in Ramallah is to honor her and all the martyrs of the Palestinian press,” Totah added.

In addition to Ramallah, many Palestinian cities have named streets and central squares after martyrs on the West Bank and Gaza strip.

Her photos and murals bearing her image are ubiquitous in the West Bank.

Families have also named their children in tribute to the veteran journalist and to express the endless effect and presence of her voice in their memories.
The Thabet family from Rafah in the southern Gaza strip named their twin daughters Shireen and Jenin, days after Abu Akleh’s assassination.

“We missed her voice during the last Israeli attacks against Gaza. She was our high voice and through her coverage, the world heard about our continuous suffering,” the girl’s father, Mohammad, told Anadolu Agency. “I honor her — her efforts during the hard nights in the streets and hospitals to make the pictures and news.”

Following the last Israeli attack on Gaza, Thabet’s house was slated for demolition and his 3-month-old daughters were injured.

“Despite this hard life under occupation, we are an endless nation. If the Israeli army killed Shireen, there are thousands of Shireen. I gave my daughter Shireen’s name because when you give your child a name of a martyr you ensure his upbringing,” added Thabet.

The family of Abu Akleh’s is still trying to get justice demanding a US investigation that they hope will lead to accountability.

The world marks Aug. 21 as International Day of Remembrance and Tribute to the Victims of Terrorism.

Despite global condemnation of terrorism, the victims of Israeli occupation in Palestine are in a continuous struggle to have their voices heard.

For them, Abu Akleh was their hope from being forgotten or neglected and she was killed while advocating for Palestinians.

The Israeli assaults against Palestinian journalists escalated during the last year.

The Palestinian Center for Freedoms and Development (MADA) documented 368 incidents against Palestinian journalists, with 155 direct violations that varied between injuries and murder.

Three journalists were killed during the last war against Gaza in August with 33 media headquarters attacked by airstrikes.

More than 100 assaults were documented against journalists since the beginning of 2022, with most in Jerusalem and Jenin in April.