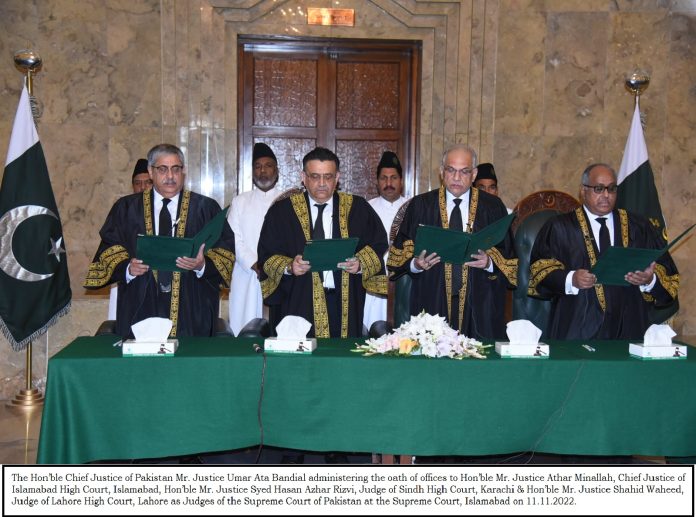 ISLAMABAD, NOV 11 (DNA) — Three newly-appointed judges of the Supreme Court were sworn in on Friday by Chief Justice of Pakistan Justice Umar Ata Bandial, taking the total strength of the apex court judges to 15.

The oath-taking ceremony of the newly-appointed judges was held at the Ceremonial Hall, Supreme Court of Pakistan, in Islamabad. Two seats of the Supreme Court judges, however, are still lying vacant.

It is pertinent to mention here that the Judicial Commission of Pakistan (JCP) headed by Chief Justice of Pakistan Umar Ata Bandial, being the chairman of the commission, had approved the elevation of three judges of high courts to the Supreme Court.

The senior-most judge of the Islamabad high Court (IHC), Justice Aamer Farooq, was also administered the oath of office by President Arif Alvi. His oath-taking ceremony was held at the President House in Islamabad and was attended by senior judges and government officials.

The proceedings formally started in IHC’s courtroom No 1 with the recitation of the Holy Quran. A number of lawyers also extended congratulations to the new CJ. Earlier on his arrival at the IHC, Justice Aamer Farooq was presented a guard of honour. =DNA