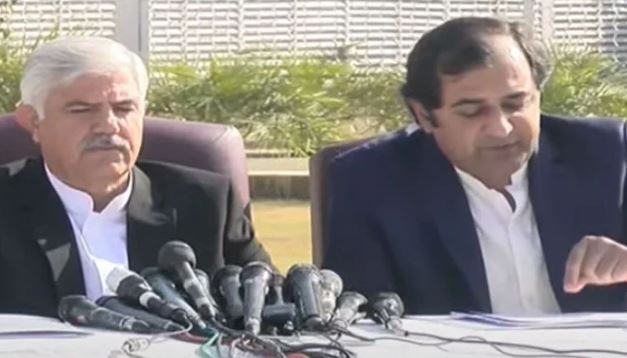 Two provinces and an administrative territory Monday have warned the Centre of staging massive protests in front of the parliament if the latter continued to drag feet on releasing their (province’s) outstanding dues worth billions.

The chief ministers threatened the federal governments with strikes and sit-ins outside the national assembly if their dues were not paid at the earliest.

Addressing the presser Chief Minister KP Mehmood Khan said that they have been going through a tough time since the PDM government took over.

The CM urged the federal government to pay estimated dues of Rs189 billion, including Rs4.5 billion for FATA Sehat Card, Rs17 billion for the Tribal Districts IDPs, and Rs61 billion under the NFC. The central government washed all PSDP projects, and did not even pay the promised Rs10 billion for flood rehabilitation, Mehmood Khan added.

Chief Minister Gilgit Baltistan Khalid Khurshed also voiced his concerns regarding the financial strains by the federal government. The CM told that Gilgit was not in the NFC award which was why they were given a special grant, which was peanuts compared to the NFC award.

He added that the budget for all entities went up by 17-25% in the 2022-23 budget; however, Gilgit Baltistan’s budget was reduced from Rs40 billion Rs15 billion. GB has never before suffered such enmity from the Centre in the history of Pakistan.

The CM GB said that the federal government has only released an Rs2.8 billion development budget for the province. How can someone govern a 73,000 sq-km area in just Rs2.8 billion? he questioned.

Finance Minister Punjab Mohsin Laghari also addressed the press conference saying the Punjab government is waiting for the payment of outstanding dues worth Rs176.4 billion from the federal government.

The federal government, violating agreements, has not given Punjab its share of the Health Card and flood relief funds, he added.

“I agree that floods have caused severe damage in Sindh and Balochistan but KP and GB have also been devastated by the calamity,” he added.

The provincial finance minister added that their project to build the Jalapur canal could not be materialised due to non-cooperation by the federal government.

Laghari accused the federal government of not cooperating with federating units, especially in financial issues, adding that they feel like they are not part of the country.