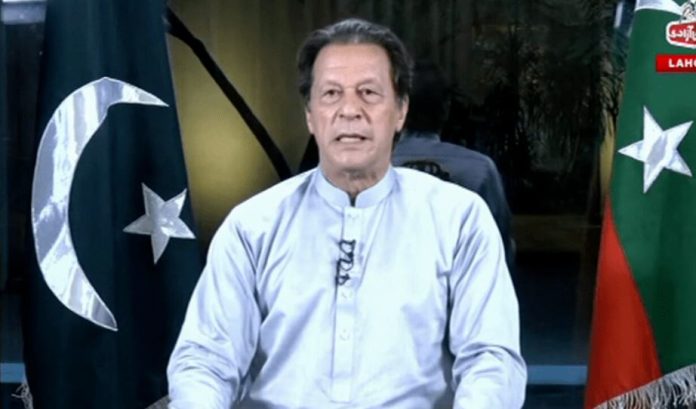 ISLAMABAD, NOV 16: PTI Chairman Imran Khan on Wednesday said that he would approach courts against Geo/Jang Group in London and Dubai-based businessman Umar Farooq Zahoor in the gulf state for his “character assassination”, saying that he had no hope in Pakistan’s justice system.

A day ago, Zahoor appeared on Geo News programme Aaj Shahzeb Khanzada Kay Sath and claimed the PTI government had sold an expensive Graff wristwatch — gifted to Imran by Saudi Crown Prince Moham­med Bin Salman — for $2 million, worth approximately Rs280m at the time of sale in 2019.

The Toshakhana case over the sale of state gifts received by Imran became a major sticking point in national politics after the Election Commission of Pakistan disqualified the PTI chief for making “false statements and incorrect declaration”.

After months of evading the topic, Imran admitted in a written reply on Sept 8 that he had sold at least four presents — including a Graff wristwatch — he had received during his tenure as the prime minister. The matter again shot into the spotlight yesterday night as Zahoor claimed in the Geo News programme that he had bought the watch through former accoun­ta­bility minister Shahzad Akbar and Farah Khan, a close aide of Imran’s wife Bushra Bibi.

The Dubai-based businessman also claimed that Farah wanted to sell the watch for $4-5m “but after negotiations, I purchased it for $2 million”. The payment, he added, was made in cash on Farah’s insistence.

The claims evoked an outcry from PTI leaders, including Akbar who denied Zahoor’s allegations.

Speaking on the matter in a video address today, Imran alleged that the PML-N, Jang Group and Geo were in cahoots in conspiring and starting campaigns against him such as the foreign funding and Toshakhana references.

“Yesterday, this combination of the PML-N and Geo brought a “fraud” whose prior history was quickly exposed by social media,” Imran said.

“They brought that fraud and did a whole programme where he said Imran Khan’s watch was sold at such a high price … and they did a whole propaganda campaign [against me].”

Imran said he did not have any hope of justice from Pakistan’s legal system and had therefore decided to file a case in London against Geo Group and it would be made to answer for his character assassination.

“I will pursue a case against this person, this fraud, in Dubai, and I will file a case against Geo in Dubai and Pakistan. I have decided that now we will take them to court because we will prove that Geo Group’s method in the country is propaganda — its purpose is not freedom of journalism but it uses its media group for an agenda. “This person they used and the programme they did […] if they did journalism with integrity then they’d have known he was a fraud […] he has no credibility and they wouldn’t have ever used such a witness,” the PTI chief said.

Imran also said that he had prior experience with the UK courts and that is why he would be pursuing a case there.

Imran had first announced his move to pursue legal proceedings and denied the programme’s allegations earlier in the day.

“Geo and Khanzada, supported by ‘handlers’, slandered me through a baseless story cooked up by a known fraudster and internationally wanted criminal,” he tweeted.

“I have spoken to my lawyers and I plan to sue Geo, Khanzada and the fraudster not only in Pak but also in UK and UAE.”