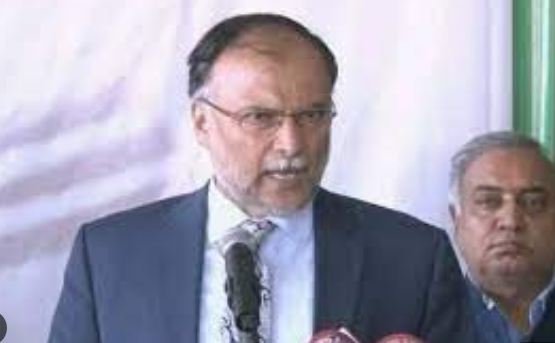 Islam has given equal rights to women but unfortunately, these rights were misinterpreted: Ahsan Iqbal

RAWALPINDI, Federal Minister for Planning, Development and Special Initiatives Prof. Ahsan Iqbal here on Friday said that women play a vital role in the development of any country and the development process remains slow where women are not given equal opportunities.

Speaking as chief guest at the concluding event of 16 Days of Activism against Gender-based violence at Fatima Jinnah Women University, the minister said that Islam has given equal rights to women but unfortunately, these rights were misinterpreted.

The Minister stressed the need to empower women for the development of the country as their role is of great importance and has been acknowledged worldwide. No country could achieve its full potential if women don’t have the same rights and opportunities as men.

He said, unfortunately in our country, females were not provided equal opportunities in the past. Though, the women of the sub-continent played a vital role in Pakistan Movement under the leadership of Quaid-e-Azam Muhammad Ali Jinnah but after the independence of Pakistan, the journey of women witnessed a break which increased gender disparity in various sectors.

Now the gap which was being observed particularly in education was swiftly being filled as the enrollment percentage of females in schools, colleges and universities is more than male students. The female students are proving their abilities in all fields, he added.

Citing the enrollment of medical colleges where admissions are offered purely on merit, the minister said, nearly 70 percent of students are females. Similarly, the percentage of women in civil services of the country particularly in most competitive services has also reached 50 percent, he added.

Educating a woman would not only empower an individual but an entire family, he said.

The recent decades have observed a variation in the females and males educational performance across Pakistan. There is a trend of females’ outperformance and males’ underperformance in tertiary education.

Young Development Fellows programme was initiated by the government to provide public policy experience to outstanding young professionals, he informed.

Ahsan Iqbal said provision of a safe and conducive environment for women entrepreneurs is our national responsibility and our religion and constitution also guarantee the protection of women’s rights.

He further said at the onset of Islam, the Prophet Muhammed (PBUH) expanded women’s rights to include inheritance, property and marriage rights.

Ahsan Iqbal said the Planning Commission had established a Gender Unit in the ministry in which all development projects would be planned according to principles of gender responsiveness so that the projects should not be approved without ensuring the interests of the women.

In vision 2025 several projects were added to empower women, he said adding, similarly, in recent floods, several initiatives were taken during their rehabilitation.

The Minister said due respect should be given to women at the workplace and educational institutions, encouraging them to play a more effective role in national development.

He stressed that a countrywide awareness campaign should be launched against women’s harassment.

Under the campaign, the Young Development Fellows attached to the ministry will start visiting educational institutes to organize the event to create awareness among the masses.